Kohli, Mukund Hit Half Centuries As India Continue To Dominate Against Sri Lanka 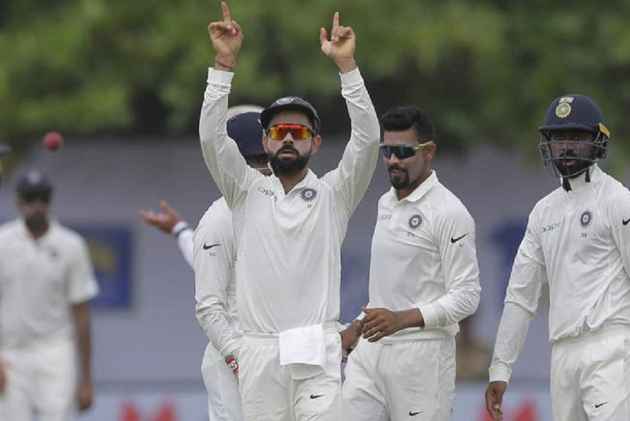 Print
A
A
A
increase text size
Outlook July 28, 2017 19:30 IST Kohli, Mukund Hit Half Centuries As India Continue To Dominate Against Sri Lanka

Brilliant half centuries from skipper Virat Kohli and opener Abhinav Mukund have taken India into a commanding position in the opening Test of the three-match series against Sri Lanka on Friday.

At Stumps on Day Three, India were 189/3 with Kohli recording his first fifty-plus score in eight innings and unbeaten on 76 while Mukund was out on what turned out to be the last ball of the day for 81, thus missing out on a well-deserved century.

India have stretched their lead to 498 and when they come to bat on Day Four, they will definitely look to set a target in excess of 600 and put the hosts under immense pressure.

Earlier, resuming at their overnight score of 154/5, Sri Lankan batsmen Angelo Mathews and Dilruwan Perera played sensible cricket to keep the Indian bowlers at bay and also got runs under their belt.

Mathews played his shots while Perera played the perfect second fiddle. However, the 62-run stand came to an end after the former captain went for a needless, rash short and threw his wicket at his individual score of 83.

Stand-in skipper Rangana Herath, the next man to bat, tried his best to build up a partnership with Perera (92*), who took the attack to the Indian bowlers with some scintillating strokes.

However, their partnership was short-lived as Ravindra Jadeja took Herath's wicket.

However, Perera continued with his hard-hitting batting style. Nuwan Pradeep (10) became the first Test scalp of Hardik Pandya and the hosts went into lunch at 289/8, with only one wicket in hand in absence of injured Asela Gunaratne, who had been ruled out of the Test due to a broken thumb.

Kohli decided not to enforce the follow on and the Indian opening duo of Dhawan and Mukund came out to bat, looking to put some quick runs on the board.

The Men in Blue didn't have a great start to their second innings, just like the first one, as both the first-innings centurions Shikhar Dhawan (14) and Cheteshwar Pujara (15) got out cheaply.

Kohli and Mukund took the innings from thereafter and made sure that the team didn't lose any further wickets. Then the rain arrived and an early tea was taken. The match was delayed by over an hour and when the match finally began, it was a one-way traffic with both Kohli and Mukund scoring freely and making sure they didn't allow their opponents to get back into the game. (ANI)