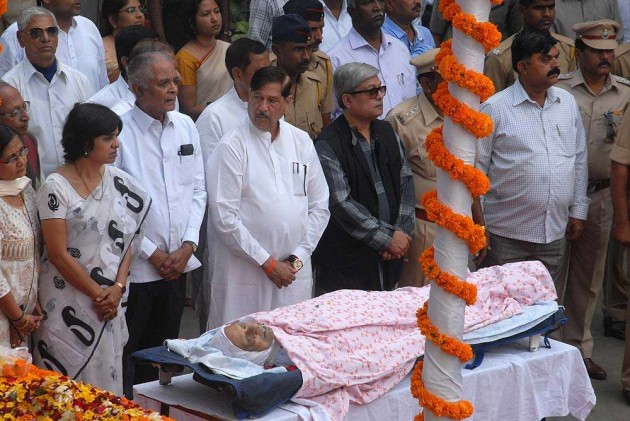 Eminent cartoonist R K Laxman, whose work ruled the pages of newspapers and the hearts of countrymen, was today accorded a state funeral here, as rich tributes were paid to the man, whose brush strokes put smile on everyman's face.

His son Srinivas performed the last rites at Vaikunth crematorium this afternoon. A guard of honour was also given to Laxman.

Union Environment Minister Prakash Javadekar also offered floral tributes to Laxman. He conveyed Prime Minister Narendra Modi's message on the occasion in which the latter said that "we have have lost a great cartoonist and also a morning smile forever."

Prior to the funeral, the body was kept at the Symbiosis Institute here to enable the veteran cartoonist's countless fans and admirers to pay their last respects.

"The government plans to build a memorial of him to inspire future generations," Tawde said.

Uddhav Thackeray said Laxman was the "last emperor of the stroke." The Sena leader recalled that his father the late Bal Thackeray and Laxman worked together and were mutual fans.

RPI leader Ramdas Athawale said there will be no other cartoonist like Laxman.

On the occasion, former Editor of Times of India, Dileep Padgaonkar said, "We have lost a legend whose brush strokes brought smile on every face and who commented on almost every aspect of life, society in his own specialised way."

Noting that the crowd of mourners included both the young and old people, Padgaonkar said the cartoonist was the bridge between generations.

Laxman was admitted to the Deenanath Mangeshkar Hospital hospital here on January 17 for urinary infection. Later, he suffered multi-organ failure and was put on ventilator.