LS Debates Bill to Set Up Commission on Appointment of Judges 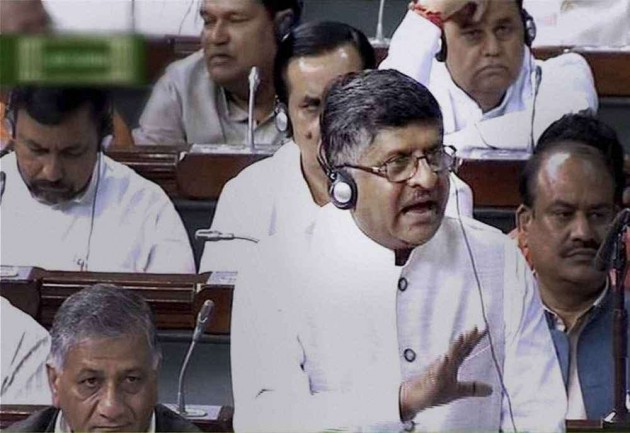 Print
A
A
A
increase text size
Outlook August 12, 2014 16:15 IST LS Debates Bill to Set Up Commission on Appointment of Judges

Government today asserted that a bill to set up a commission on appointment of judges is aimed at having a "fair procedure" for appointing judges to higher courts and it has no intention to have any confrontation with the judiciary on the issue.

Moving the National Judicial Appointments Commission Bill, 2014, in Lok Sabha for passage, Law Minister Ravi Shankar Prasad said the government favours independence of judiciary but the "sanctity" and "supremacy" of Parliament is equally important as it reflects aspirations of the people.

He said he had held widest possible consultations on the issue, including with eminent jurists and political parties, before bringing the Constitution amendment bill and it was a "historic" occasion to amend the significant law.

The Commission is proposed to be set up to have a "fair procedure" to appoint judges to higher judiciary while properly maintaining the "judicial dignity", he said.

"Government has no intention, whatsoever, of having any confrontation with the judiciary...As an article of faith, we respect the judiciary," said Prasad, who repeatedly invoked the architect of the Constitution B R Ambedkar while justifying the government's move to overturn the system where judges appoint judges. He even saluted Jawaharlal Nehru.

Describing Lok Sabha as "the biggest panchayat of India" which reflects "aspirations of India", he sought support of all parties, asking them to rise above political considerations and show their resolve.

Dismissing suggestions that the government was "rushing through" the bill, the Law Minister said four attempts have been made since last 20 years for amending the Constitution as the present collegium system of appointing judges to higher judiciary has not been found adequate.

"No, we are not at all rushing. It is only the culmination of exercise of 20 years," he said.

Besides, seven recommendations have been made by various Commissions, including the Law Commission and the Administrative Reforms Commission, for changing the collegium system.

Even late Justice J S Verma, who had written the 1993 judgement by which collegium system of appointing judges was set up, had later himself said his intent has been "misunderstood" and "misconstrued" and a "rethink is required."

The National Judicial Appointments Commission Bill was taken after suspending rules of procedures after keeping in abeyance the consideration of Apprentices Amendment Bill, 2014 amid protest from opposition Congress.

Congress leader Mallikarjun Kharge said government was "bulldozing" everything and bringing any bill any time without proper notice. He suggested that Speaker Sumitra Mahajan was giving too much liberty leverage to the ruling benches.

"This shows that the government does not have any vision or agenda," he said.

Responding to this, Parliamentary Affairs Minister M Venkaiah Naidu said the government has "agenda" besides the mandate of the people.

He said the provision that if two of the six members oppose a candidate, his or her appointment will not get through is "undemocratic".

The former Law Minister said one of the two eminent persons who would be part of the Commission should necessarily be a woman.

He also asked Law Minister Ravi Shankar Prasad to clarify on the definition of eminent person. "If it is not laid down in rules, then everyone is eminent," he said.

Moily was of the view that while efforts were on to scrap the collegium system, parliamentarians should give it due credit for giving good judges to the country.

He said the pre-collegium era should also not be dubbed as a period where judicial appointments were based merely on political considerations. Black sheep will always be there, he said.

AIADMK leader M Thambidurai said the procedure adopted for appointment of of judges is not in keeping with the spirit of the Constitution as the role of the executive has been taken away.

He said AIADMK would support the bill only if the government accepts its amendments.

The party has suggested that the National Judicial Appointments Commission should function at the national level, the states should have a separate commission for appointment of High Court judges.

"State governments too should be given representations, and their voice should be heard for appointment of judges," he said.

He said the collegium system of appointing judges, which is prevalent from 1993 till now, is not acceptable and added that after retirement, judges should not be given any appointment.

S S Ahluwalia (BJP) said the bill does not seek to create confrontation between legislature and judiciary. "Bringing amendment and introducing legislation is the primary work of the legislature...With passage of time, everything needs amendment," he said.

Kalyan Banerjee (TMC) regretted that the collegium system for appointment of judges has reduced the status of legislature and executive to "clerks".

Citing examples of "misuse" of collegium system to deny promotion to "deserving" judges, Banerjee said it had acted in the most opaque manner.

"That is very unfortunate. The system has to be changed," he said.

Observing that judges often criticise the legislature, Banerjee said politicans have not committed any crime by joining politics and becoming Members of Parliament. "They should not travel beyond their jurisdiction," he said.

If the judges do not respect legislature, how can they command respect, Banerjee said.

"It is a historic day," he said, adding the government should also think of introducing a system of transferring High Court judges after three to four years as is the practice in other government departments.

Banerjee suggested that number of Public Interest Litigations (PILs) will come down drastically if it was stipulated that media would not write the names of judges and lawyers in their reports.

In order to dilute the monopoly of Supreme Court lawyers, he suggested that governemnt should consider setting up of circuit benches of the Supreme Court and also come out with a law to regulate fee of lawyers.

Criticising the collegium system, Bhartruhari Mahtab (BJD) said it lacked transparency and at times overlooked "merit and integrity" in appointment of judges.

He stressed that there was need to ensure that "best and honest" are appointed to higher judiciary.

Anandrao Adsul (Shiv Sena) said under the current system, "we are getting decisions but not judgement".

Supporting the bill, he hoped it would improve the system of appointment of judges.