'By far the best Indian captain', 'the most charismatic cricketer of his generation.' R.I.P. 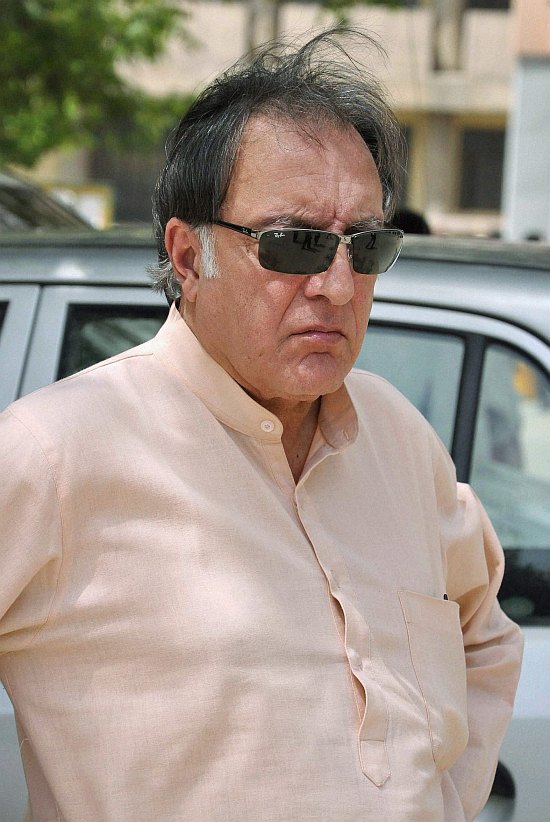 Mansur Ali Khan Pataudi, one of India's greatest cricket captains ever and whose flair and style captured the imagination of cricket fans, passed away here today after battling a lung infection for the last few months.

The 70-year-old cricketer, known as 'Tiger' in the cricket fraternity, was suffering from interstitial lung disease, a condition in which the passage of oxygen to the two lungs is less than normal.

Pataudi had taken ill since his return from England this summer after presenting the Pataudi Trophy to Andrew Strauss at the end of the four-Test series.

He is survived by his wife Sharmila Tagore, his actor son Saif Ali Khan and his two daughters Soha and Saba Ali Khan. His entire family was at his bedside when the end came at 5.55 pm this evening.

"He passed away around 5.55 pm. His condition had deteriorated since yesterday. He was suffering from interstitial lung disease (interstitial pneumonitis) which worsens rapidly inspite of the best treatment available," Dr S P Byotra, Department of medicine in Sir Ganga Ram Hospital, where Pataudi was admitted, said.

"He was unable to maintain his oxygen level in spite of maximal treatment. He continued to remain in the ICU for nearly a month. He had this disease which had been static since the last three months and worsened very acutely over the last four weeks, the doctor said.

Dr Sumit Ray, vice chaiman, critical care, Sir Ganga Ram Hospital said he died of respiratry failure leading to cardiac arrest. He was was admitted on August 29 and was conscious till yesterday evening.

"He was in the Intensive Care Unit for last three days and his condition did not improve. His family in all probability will take his body tomorrow morning", he said.

Pataudi, who lost his right eye because of an accident, played 46 Tests between 1961 and 1975 and was arguably India's greatest captain. He was given the leadership in his fourth Test, when he was 21, in Barbados in 1962, because the regular captain Nari Contractor was in hospital after getting hit on the head by Charlie Griffith.

Pataudi, who was also known for his amazing sense of humour, was the youngest Test captain, a record that stood until 2004. He led India in 40 Tests and had a successful career despite impaired vision in his right eye, which was damaged in a car accident. He also captained Sussex and Oxford University.

Pataudi scored 2793 runs in 46 Tests at an average of 35 and made six centuries, the biggest of which was an unbeaten 203 against England in Delhi in 1964.

However, many experts rate his 75 against Australia in Melbourne in 1967-68 as his finest since he played that knock with an injured leg. Pataudi retired in 1975 after West Indies' tour of India.

After retirement, Pataudi served as a match referee between 1993 and 1996, officiating in two Tests and ten ODIs, but largely stayed away from cricket administration.

Pataudi was the ninth and last Nawab of Pataudi until 1971, when the Indian government abolished royal entitlements through the 26th Amendment to the Constitution. Pataudi's father, Iftikhar Ali Khan, represented both England and India in Tests.

In 1964, Pataudi was bestowed the Arjuna Award before being honoured with a Padma Shri in 1967.

He was also the editor of Sportsworld, the now defunct cricket magazine, and a television commentator in the 1980s but gradually withdrew from an active role, though he remained a strong voice in Indian cricket.

Since 2007, bilateral Test series between India and England have been contested for the Pataudi Trophy, named after his family for their contribution to Anglo-Indian cricket.

He was also a part of the first IPL governing council but refused to continue in the role in October 2010, when the BCCI made significant changes to the league following the sacking of Lalit Modi as its chairman.

Indian cricket fraternity reacted with shock and sorrow on his demise. Former and current stalwarts of the game remembered how Pataudi had influenced their careers in different ways and said his demise has left a void in Indian cricket.  And the tributes were by no means limited to cricketers. A select few reactions:

"His stylish batting style and agile fielding abilities define a new generation of Indian cricketers of that period."

"I am deeply grieved to learn about the sad demise of Mansur Ali Khan Pataudi, eminent cricketer and sportsperson. Pataudi's contributions to the game of cricket throughout his life as a player, captain, coach and analyst need no elaboration. His absence from the game of cricket and public life is a terrible loss. My wife joins me in sending our heartfelt condolences to the members of the bereaved family and the wide circle of his admirers and friends."

"It is an extremely painful loss for me. Unbearable and shocking loss. He was one of the greatest captains to lead India. He gave a new face to Indian cricket and emphasised on the role of quality fielding. He was primarily responsible for developing India's spin quartet in an aggressive role similar to what the West Indians had later in form of the pace quartet. He always believed that teams have to bowl at least 80 to 85 attacking overs out of 100 overs."

"It is a great personal loss, he was a very dear personal friend, he was my first captain, I learnt a lot from him. He was by far the best Indian captain to my mind of thinking. It is a very sad day for Indian cricket. He was the foremost outstanding champion of Indian cricket. With his sad demise, that chapter is closed now. I am too shocked to react to this news."

"It is a big shock for me.  A great captain, always attacking and aggressive.. never defensive at any stage. He always focused on trying to win the match and would go all out to win. We had four spinners then, and I, especially, was extremely lucky to have had him as a captain."
--Bhagwat Chandrasekar

"It is a terrible news for me, he brought me up and guided me. I can't even express myself, it is one of my saddest days. He was a great human being, a great cricketer, a great fielder, shrewd captain, it is really sad...He always guided the youngsters, I was very close to him, so I can't really forget the way he brought me up. He was my first captain under whom I played. Whatever career I had, it stands on him"

-- Gundappa Viswanath
"This is very sad news indeed. Only a few weeks ago we saw him in England at the presentation of the Pataudi Trophy and he looked his usual self. Therefore to get this news is a shock...Tiger Pataudi was the most charismatic cricketer of his generation. To bat with almost zero vision in one eye and still to score nearly 3000 runs and half a dozen centuries in Test cricket tells you what a genius he was. He will be terribly missed and it's a huge loss to the game of cricket."

"I am devastated, I had no idea he was in hospital ... He was a contemporary of my cousin Javed Burki, and what I heard from my cousins, and from his contemporaries, was that had he not lost his eye apparently, he was a genius of great proportions. Anyone who knows batting, knows that it's difficult to play with one eye, specially fast bowling. What he achieved with one eye, the sort of ability he had, what sort of a player he could have become..."

"It's a sad news. He was a great player, fantastic captain and an outstanding fielder. He was a gutsy player and an innovative captain. He won many may matches for India. We are going to miss him."

"It is a great loss for Indian cricket. He is one fellow, so stylish and aggressive. He achieved so much at the age of 21, he played an aggressive brand of cricket. He was very friendly and a fun loving person, he had very subtle and good sense of humour. His greatest quality was the way he hit those sixes. He is called Tiger because of his extraordinary fielding at covers. He lost one eye but still went on to score so many runs. He expresses his views but never tried to impose them. One thing I like to inculcate from him is his determination and aggressiveness."

"It's a terrible loss to the cricketing world. I had the privilege of meeting him on a few occasions. World cricket will miss a hero like him. I really respected him."
--Sachin Tendulkar

"I am extremely saddened hearing the news about Pataudi passing away. My heartfelt condolence to his family and may his soul rest in peace."

"It is a sad day for Indian cricket, he was an inspiration for us. I never had the chance of seeing him play but I always heard how big an impact he made on the game. I had the chance of interacting with him on various issues. He was extremely knowledgeable, he deeply cared about Indian team. It is such a loss not only for his family and friends but also for Indian cricket,"

"It's a sad moment for cricket fraternity. It's shocking news to me as only few days back I met him in England. I have never interacted with him on cricketing techniques but he had a great cricketing acumen and a very knowledgeable person, given the amount of experience...His record speaks for itself. May his soul rests in peace. I am confident his legacy will continue. He had a lot of passion for Indian cricket. His knowledge and acumen about cricket will definitely be missed."