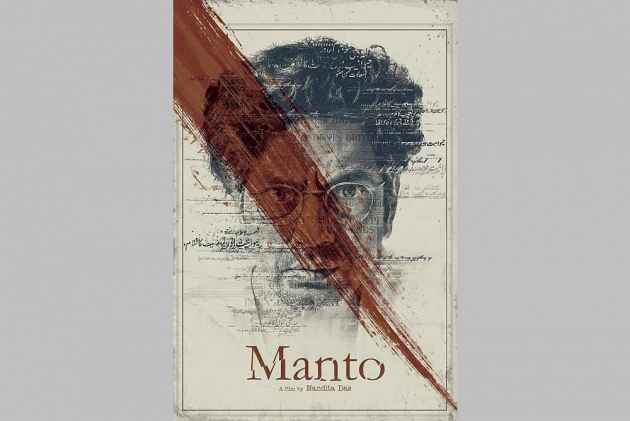 Nawazuddin, who is essaying the titular role in the movie titled "Manto", appears lost as he carries the writer's signature dishevelled hair with elan.

The sepia-toned poster resembles a pamphlet with few Urdu scribblings spread across the canvas.

A red-coloured broad brushstroke mars the portrait of Nawazuddin's Manto, perhaps to symbolise the bloodshed associated with the Partition that deeply affected the "Thanda Gosht" writer.

The title appears in a broken font to suggest the fragile state of mind that the author harboured during the division of India and Pakistan.

The first look of this feature film based on the life of Manto was launched at the Cannes Film Festival.

Other posters have also been released. One of them, shows Manto creating more stories on paper, while another shows him explaining something to his smiling wife, Safia, played by actress Rasika Dugal.

Nawazuddin recently showcased "Manto" at the market section of Cannes.

Nandita's film primarily focuses on Manto's years in Mumbai, a city he loved and mourned being separated from. Manto died in 1955 in Lahore, Pakistan.

Continue FREE with Ads Pay Rs. 1 to Read Without Ads
READ MORE IN:
Saadat Hasan Manto Nawazuddin Siddiqui Arts & Entertainment
Next Story : Is There A Policy On Kashmir Or Not, Owaisi Asks PM Modi
Download the Outlook ​Magazines App. Six magazines, wherever you go! Play Store and App Store