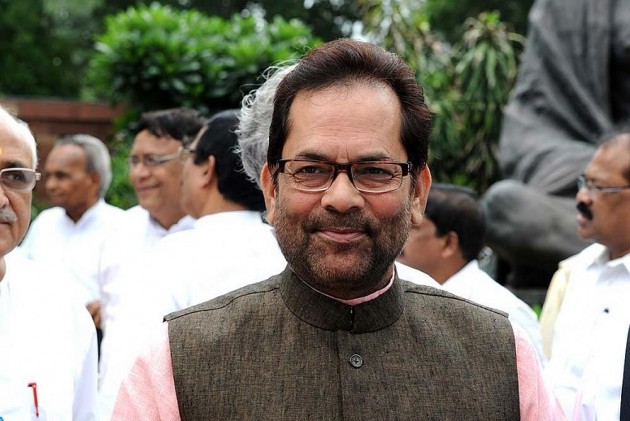 Print
A
A
A
increase text size
Outlook May 11, 2017 16:59 IST Modi Govt Created Atmosphere of Trust Among Minorities Without Appeasement: Naqvi

The Modi government's policy of empowering minorities "without appeasement" has created an "atmosphere of trust" among these communities over the last three years, Union Minister Mukhtar Abbas Naqvi claimed today.

The Minister of State for Minority Affair's comments come against the backdrop of often-levelled allegations that an "atmosphere of fear" is prevailing among minorities under the present BJP-led government.

Speaking to reporters ahead of the NDA government's third anniversary, Naqvi said it has worked to uplift the minorities by providing them education and skill-based training to ensure they become beneficiaries of mainstream development.

Muslims, Buddhists, Christians, Sikhs, Parsis and Jains are the notified minority communities in the country.

He also claimed that the Modi government has built more educational infrastructure than the previous Manmohan Singh dispensation.

"The steps taken by the Modi government for the progress of the minorities are a reflection of its empowerment without appeasement policy. It has created an atmosphere of development and trust among the minorities," Naqvi claimed.

He listed several welfare schemes being implemented by his ministry for the minority communities.

The minister heaped praises on the government for making budgetary allocations of Rs 4,195 crore for the development of these communities for 2017-18, a hike of Rs 368.23 crore over the previous fiscal.

Naqvi said 70 per cent of the total allocations have been marked for executing schemes aimed at education and skill development of the minority communities.

Hitting out at the previous Congress-led UPA government, Naqvi alleged it did not open "even a single" degree college for the minorities between 2007 and 2014.

On the other hand, the present government has built 33 degree colleges in areas dominated by the communities population-wise, he said.

Between 2007 and 2014, Naqvi said the UPA government has set up 72 industrial training institutes (ITIs) as against 97 opened by the present NDA government since 2014, the minister said.

"The National Minorities Development and Finance Corporation (NMDFC) has distributed financial assistance to 1,08,588 beneficiaries in 2016-17, while 75,966 people were benefited in 2013-14," Naqvi said.

He reiterated that the Modi government is committed to providing quality education to students belonging to minority communities by setting up five world-class educational institutes.

The Union minister said the government plans to start academic sessions in these institutes from next year and his ministry has proposed 40 per cent reservation for girl students there.

About 100 Navoday Vidyalaya-type schools will be opened in minority-dominated areas in the coming months.

Naqvi said the ministry will launch a campaign 'tehreek- e-taleem' to offer better education to poor students. He, however, did not elaborate it.

Naqvi said over 5.2 lakh youths, including about 40 per cent women, have been covered under various job-oriented skill training schemes of his ministry at an expenditure of Rs 578 crore.

Thousands of minority communities' schools and Madrasas have been provided '3Ts - teachers, tiffin and toilets' in the last three months, he said.

He also referred to 'Hunar Haat' the ministry has organised to give artisans from minority communities exposure to national and international markets.

Several states have come forward to provide land for the Haat. Future editions of the Haat will be organised in Puducherry, Mumbai, Lucknow, Bengaluru, Kolkata, Guwahati, Ahmedabad and Jaipur.