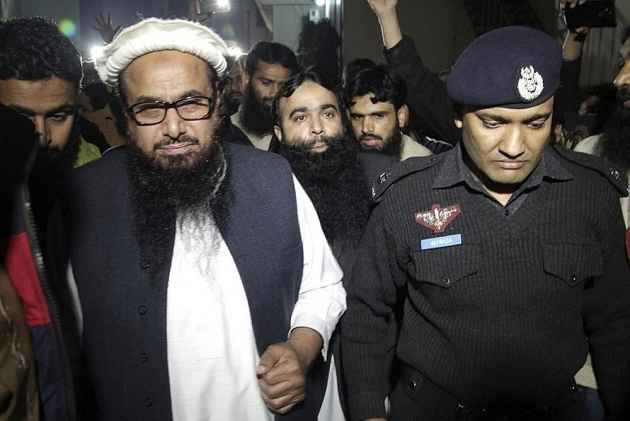 Mumbai terror attack mastermind and Jamaat-ud-Dawah chief Hafiz Saeed and his four aides will have to celebrate Eid in custody as Pakistan's Lahore High Court today deferred its verdict till July 3 in their detention case.

"As a division bench headed by Justice Abdul Sami Khan today held the court to announce the verdict a government law officer requested it (bench) to defer it as the deputy attorney general was not present in the court," a court official told reporters outside the courtroom.

Accepting the government’s request, the bench deferred the announcement of its verdict in Saeed’s house arrest case till July 3, the official said.

The court official gave no further reason for deferring the announcement. "The bench will again sit on July 3 and announce the verdict in Saeed’s case," he added.

The court had reserved the decision on June 7 after the Punjab government law officer submitted a reply and Saeed's counsel advocate A K Dogar completed his arguments.

The court had declared that it would announce the verdict in Saeed’s detention case on June 19.

Saeed and his four close aides - Abdullah Ubaid, Malik Zafar Iqbal, Abdul Rehman Abid and Qazi Kashif Hussain - have been detained on the instruction of the federal government for their alleged involvement in activities prejudicial to peace and security of the country, says the Punjab government.

The government had also submitted the report of the judicial review board on the detention of Saeed and his aides.

In his arguments, Dogar said the government did not produce the petitioners before the judicial review board prior to expiry of their detention period (April 30) and extended their detention on its own.

He said extending detention period without the mandatory approval of the review board is "illegal".

Dogar said the government detained the petitioners to "please India and America only".

He said the courts of the country in past had declared detention of the JuD chief illegal as government failed to prove its charges against him. He prayed to the court to set aside the detention of the petitioners for being unconstitutional.

Earlier, the three-member review board headed by Justice Ejaz Afzal Khan of the Supreme Court had reserved its verdict on the detention of Saeed.

Saeed last month had appeared before the review board and told it that he had been detained by the Pakistani government in order to "stop him for raising voice for Kashmiris".

The federal interior ministry rejected his arguments and told the board that "Saeed and his four aides have been detained for spreading terrorism in the name of Jihad".

On April 30, detention of Saeed and his four aides was extended by the Punjab government for another 90 days under preventative detention under 11 EEE (I) and 11D of Anti- Terrorism Act 1997.

The Punjab government on January 30 had put these five under house arrest in Lahore under the Second Schedule of Anti-Terrorism Act 1997.