Nadine Gordimer, Novelist Who Took On Apartheid, Dies at 90 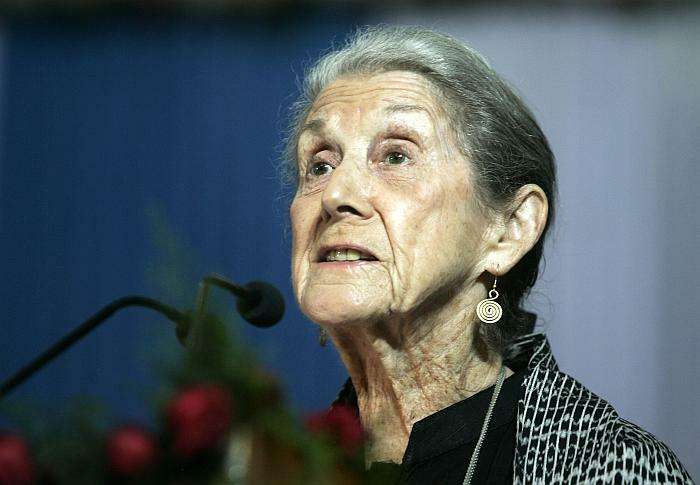 South African Nobel Prize-winning writer and anti-apartheid activist Nadine Gordimer, who became an icon through her unique insights into the country's social agonies, has died at the age of 90.

Through 15 novels, several volumes of short stories, non-fiction and other works published in 40 languages around the world, Gordimer eviscerated white-minority rule under the apartheid system and its aftershocks once democracy had been achieved in 1994.

The writer, who was awarded the Nobel Prize for Literature in 1991, died peacefully in her sleep at her home in Johannesburg yesterday, her family said.

Gordimer's reputation rests on a series of novels including A Guest of Honour, The Conservationist, Burger's Daughter, July's People and A Sport of Nature, which the Nobel committee called "magnificent epic writing".

News of her death prompted an outpouring of tributes, notably from the Nelson Mandela Foundation, which handles the legacy of South Africa's peace icon and first democratic president.

The foundation described Gordimer as "a great writer, patriot and voice for equality and democracy".

Mandela had a long friendship with Gordimer, beginning in his years as a young activist and continuing after his release from prison in 1990, the foundation said.

In his autobiography, Mandela wrote of his time in prison: "I read all the unbanned novels of Nadine Gordimer and learned a great deal about the white liberal sensibility."

The ruling African National Congress noted that Gordimer had been a party member while it was a banned organisation, and said the country "has lost an unmatched literary giant whose life's work was our mirror and an unending quest for humanity".

The government lauded Gordimer for her writing which "embodied her passion for the demise of apartheid".

"South Africa has lost a voice that is revered across the globe. She told a story that was not allowed to be told," said Communications Minister Faith Muthambi.

For Gordimer, her profession was an affliction.

"Writing is indeed, some kind of affliction in its demands as the most solitary and introspective of occupations," she once said.

The anti-apartheid activist also said it was not truth itself which was beauty, but the hunger for it.

She found this hunger at a young age when, growing up in a well-off, racially-segregated neighbourhood, she spent her childhood secluded in libraries.