Never Forget the Genocide, But Reconcile: Pope to Armenians 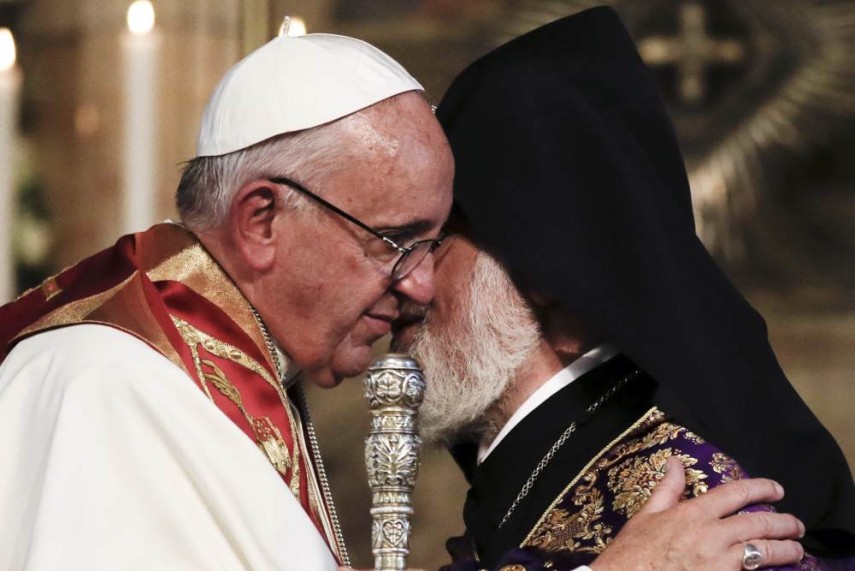 Print
A
A
A
increase text size
Outlook June 25, 2016 12:56 IST Never Forget the Genocide, But Reconcile: Pope to Armenians

Pope Francis insisted today the world should never forget or minimize the Ottoman-era slaughter of Armenians but urged Armenians themselves to infuse their collective memory with love so they can find peace and reconcile with Turkey.

Francis began his second day in Armenia by paying his respects at the country's imposing genocide memorial and greeting descendants of survivors of the 1915 massacres, who have been emboldened by the pope's recognition of the 1915 "genocide."

Francis presented a wreath at the memorial and stood, head bowed, in silent prayer before an eternal flame as priests blessed him with incense and a choir sang haunting hymns.

"Here I pray with sorrow in my heart, so that a tragedy like this never again occurs, so that humanity will never forget and will know how to defeat evil with good," Francis wrote in the memorial's guest book. "May God protect the memory of the Armenian people. Memory should never be watered-down or forgotten. Memory is the source of peace and the future."

Francis also greeted descendants of the 400 or so Armenian orphans taken in by Popes Benedict XV and Pius XI at the papal summer residence south of Rome in the 1920s. Also approaching Francis was Sosi Habeschyan, 68, and her sister; their mother was a genocide orphan adopted and raised by Danish missionary Maria Jacobsen, who worked in the Ottoman Empire in 1915 and wrote about the massacre.

"A blessing has come down on the land of Mt. Ararat," said Andzhela Adzhemyan, a 35-year old refugee from Syria who was a guest at the memorial. "He has given us the strength and confidence to keep our Christian faith no matter what."

Francis returned to the theme of memory during a Mass in Gyumri, where several thousand people gathered in a square for his only public Catholic Mass of his three-day visit to Armenia.

Nestled in the rolling green hills and wildflower fields of northwestern Armenia, Gyumri has long been a cradle of Christianity, and Francis came to pay homage to its faith even in times of trial.

"Peoples, like individuals, have a memory," he told the crowd from the altar. "Your own people's memory is ancient and precious."

Francis again raised the importance of memory at an evening prayer in Yerevan's Republic Square, which drew the largest crowds of his visit, some 50,000 according to Vatican estimates. With the patriarch of the Apostolic Church, Karekin II, by his side and President Serzh Sargsyan in the front row, Francis said even the greatest pain "can become a seed of peace for the future.