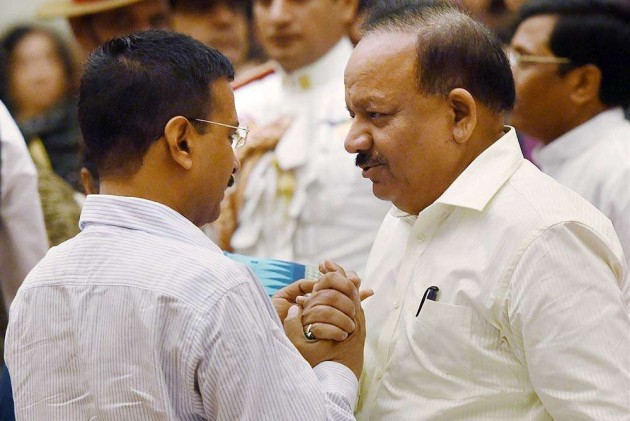 Print
A
A
A
increase text size
Outlook May 06, 2015 16:17 IST No Mechanism Available to Predict Earthquakes: Govt

There is no mechanism as of now to forecast earthquakes but all aspects are monitored closely to ensure that warnings are issued at the earliest, government said today.

Science and Technology and Earth Sciences Minister Harsh Vardhan told the Lok Sabha that the country has the best possible collaboration with various agencies.

Everything is monitored properly and warnings are issued as early as possible but "there is no mechanism where I can forecast earthquakes for the next 24 hours," he said during Question Hour.

Late last month, a massive earthquake devastated large parts of Nepal and affected some areas in India. Over 7,550 people, including over 40 Indians, have been killed by the temblor.

Referring to the advances made by India in the area of earth sciences, Harsh Vardhan said that about the recent earthquake, Prime Minister Narendra Modi got information about it even before his Nepalese counterpart knew.

The country has made "extraordinary progress" in this regard, he said.

Emphasising that the country was not lagging behind any others in terms of earth sciences and related forecast, he said whatever information is received related to weather the same is utilised properly.

Harsh Vardhan said it is now possible to give early warnings about possible tsunami which is shared with other countries. Every effort is made to ensure that information about weather is shared promptly with various agencies, he added.

Noting that hailstorms cannot be stopped, he said to help farmers, whatever research is required, is being done. The government has Memorandums of Understanding with various countries and organisations for collaborations.

To a question that the Ministry's budgetary allocation is less, the Minister said it would put the money to optimal use. "We are developing new strategies and technologies... If needed we will ask for more budget," he said.

Some preliminary work has been initiated under Memorandum of Understanding (MoU) between Earth System Science Organisation (ESSO), which is under the Earth Sciences Ministry, and the US-based University Corporation for Atmospheric Research (UCAR).