No Policy Paralysis, GDP to Touch 8% This Year: Panagariya 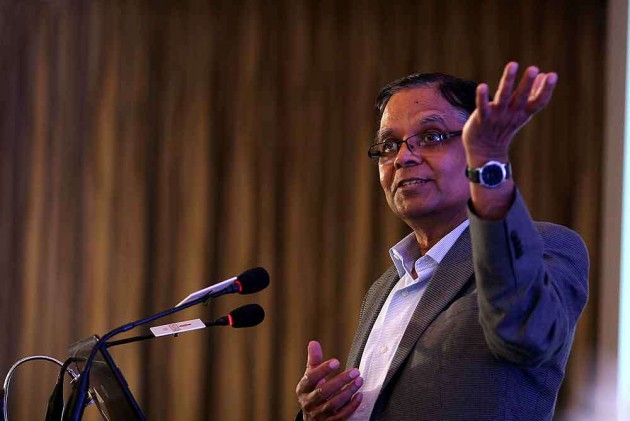 Rejecting criticism that the policy paralysis has returned to haunt the NDA in view of critical legislations getting stuck in Parliament, NITI Aayog Vice Chairman Arvind Panagariya says the economic growth this year may touch eight per cent due to implementation of various critical economic reforms.

He asserts that projects are being cleared and gathering speed and ease of doing business has improved.

"In the last quarter meaning January to March, 2016, I expect that we would touch eight per cent mark, hopefully cross it a bit," he told PTI here in an interview.

He said the economic growth for the entire year is expected to be at 7.5 per cent to eight per cent.

"We might get full eight per cent because I also expect the first quarter growth rate which has been at seven per cent for 2015-16 will be revised upwards," he said.

"We will continue to make progress. When we come to the last year of the present term of Prime Minister Narendra Modi, I would expect it would be near the double digit," he said.

Panagariya, who is in Beijing for talks with China’s key think-tank the Development Research Centre on the status of the Sino-Indian economies, strongly denied criticism that the policy paralysis is creeping into the Modi government in view of government's inability to push through important legislations like GST Bill and Land Acquisition bills.

"The policy paralysis has been eliminated completely from the government. Three is a well functioning government at the centre," Panagariya said.

"The Prime Minster himself single handedly has made huge effort due to which we have moved up 12 places in the (World Banks’s ease of doing business) rankings. This does not take a lot of changes into account because the changes have been made after the World Bank has completed its survey," he said.

"So you will see a much greater jump in the next round," he added.

"We are doing better. Do not forget coal and minerals, where new reforms have been brought in and auction is progressing in the way it should have. In the spectrum there is no cases of high level corruption. Labour market reforms have been happening thanks to the central government flexibility. The state governments are changing laws in the concurrent list," Panagariya said.

Noting that the Parliament impasse is part and parcel of democracy, he said, "It is not unusual for a party to take one position in the government and opposite position when it is in opposition. It happens. So negotiation has to happen."

"The government has certain advantage in bringing the opposition to the negotiating table. That is oneway. There is also ways to bring in reforms under the Indian Constitution. Lot of our reforms thankfully (are) on the central list. A number of them have already been done," he said.

"Not all but a very large number of reforms in the union list have been done which included product market related issues like investment licensing, foreign investment restrictions, import licensing, very high tariff rates protection. They have been largely implemented," he said.

"It is the factor market related reforms particularly related to land and labour which are in concurrent list. The legislation on the concurrent list can also be changed by the state government. Like the land acquisition which Tamil Nadu government has already done. Labour laws were amended by Rajastan, Gujarat and Madhya Pradesh governments," he said.

"So whole lot of things are happening which are positive," he said.

Playing down the impasse in Parliament over the GST (General Sales Tax) and Land Acquisition Bills, he said it arose due to change of stand by some of the chief ministers.

"Originally when the government brought the Land ordinance, all chief ministers said they need change. Then their parties changed their minds in Rajya Sabha (and) legislation could not be passed. Now the states are doing the reform on land acquisition. Tamil Nadu has already done it. States like AP, Gujarat and Rajasthan these are progressive states. They will make necessary changes," he said.

"But it will be implemented. Real issue is not whether it will be implanted or not. Question is in what form ultimately the government will be able to implement it. If it is clean with a broad base of taxation then we can have relatively low tax rate and that will be quite a revolution," he said.

Panagariya said that eventually the GST bill will get the Parliament nod.

"The government will negotiate its way on the GST. The real question is does the opposition parties play politics therefore we get an emaciated GST or we get the opposition see the merit of the policy and votes a policy in place which would be good GST meaning with wide tax base and relatively low tax rate," he said.

Asked whether the government will settle for an emaciated GST, he asserted, "as I said it is a process. We have to start somewhere and build on it. My recommendation to the Finance Minister is...Please go ahead and negotiate and start somewhere. Then we (will) try fix it and amend it further."

"Yes there is a case of further rate cut by RBI. Before the latest reduction of 50 basis points cut in the interest rate, I was saying 50 to 100 basis points. So 50 was minimal. So certainly there is room for further action because the inflation itself has declined to 7 to 8 percentage points measured by CPI.

"Measured by WPI it will be more because it was running in the negative territory for a while. When the inflation rate has declined that much nominal interest rate has declined only by 1.5 points. I think there is room," he said.

Asked about perception that the economy should be doing better due to falling oil prices, Panagariya said, "the low prices has benefitted us. It contributed to macro coming into good shape faster. We would have brought it, I am sure. But the low oil prices helped in spending up."

"So the current account deficit is now between one and two per cent. It quickly came down. Then also fiscal deficit, remember that the decline of oil prices also helped the fiscal," he said.

About the fall in commodity prices, he said, "the global commodity prices connected to many phenomenon which are impacting us. The slowdown in China also means that production of steel is declining world wide. That has lead to the decline of the price for iron ore which we are exporting."

"So these developments make an impact. Luckily we are not purely dependent on the commodity prices. In oneway we actually benefitted by the commodity prices decline because they also mean agricultural commodities and helps to cut the inflation. To protect the farmer we still have the minimum support price. So it keeps farmers protected. As far as food inflation is concerned the commodity prices generally seen as a good news," he added.