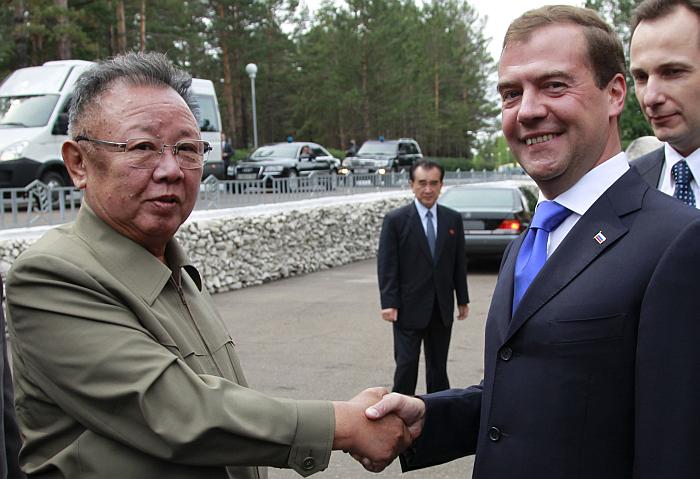 outlookindia.com
-0001-11-30T00:00:00+0553
North Korea today announced the death of supreme leader Kim Jong Il and asked its people to rally behind his young son and heir-apparent, while the world watched for signs of instability in a nation pursuing nuclear weapons.

South Korea launched a high alert for its military as it faces the North's 1.2 million-strong armed forces, while President Barack Obama and South Korean President Lee Myung- bak agreed by phone to closely monitor the events and cooperate.

People on the streets of the North Korean capital, Pyongyang, broke into tears as they learned the news that their "Dear Leader" had died at the age 69 of heart failure Saturday while carrying out official duties on a train trip.

"He passed away too suddenly to our profound regret," said a statement carried by the North's official Korean Central News Agency. "The heart of Kim Jong Il stopped beating, but his noble and august name and benevolent image will always be remembered by our army and people."

While there was no immediate statement on official succession, there were clear indications that Kim's 20-something son, Kim Jong Un, would be in charge.

The North said in a dispatch that the people and the military "have pledged to uphold the leadership of comrade Kim Jong Un" and called him a "great successor" of the country's revolutionary philosophy of juche, or self reliance.

"At the leadership of comrade Kim Jong Un, we have to change sadness to strength and courage and overcome today's difficulties," North Korea said.

It was not immediately clear what effect Kim's death would have on recent efforts to bring North Korea back into nuclear talks aimed at exchanging aid for commitments by the North to disarm.

South Koreans expressed concern over the news. But an analyst said Kim's death was unlikely to plunge the country into chaos because it already was preparing for a transition.

"There won't be any emergencies in the North at least in the next few months," said Baek Seung-joo of the state-run Korea Institute for Defense Analyses in South Korea.

Kim Jong Il unveiled his third son Kim Jong Un as his successor a year ago, putting him in high-ranking posts.

Little is known about the younger Kim, who is believed to be in his 20s. Kim Jong Un regularly accompanied his father on trips around the country over the past year. Kim Jong Il inherited power after his father, revered North Korean founder Kim Il Sung, died in 1994.

The North said it would place Kim's body in the Kumsusan memorial palace in Pyongyang and would hold a national mourning period until December 29, when "all the people in the nation (will) spend three minutes in silent prayer."

Kim's funeral will be held on December 28, it said, adding that all entertainment would be banned during the mourning period and that the country would accept no "foreign delegations hoping to express condolences."

South Korea's police were placed on a high alert after Kim's death, according to the National Police Agency, and the South Korean parliament convened emergency committee sessions on national defense, intelligence and unification affairs.

In a "special broadcast" from the North Korean capital, state media today said Kim died on a train due to a "great mental and physical strain" on December 17 during a "high intensity field inspection." It said an autopsy was done on December 18 and "fully confirmed" the diagnosis.

"It is the biggest loss for the party... And it is our people and nation's biggest sadness," an anchorwoman clad in black Korean traditional dress said in a voice choked with tears.
Continue FREE with Ads Pay Rs. 1 to Read Without Ads
READ MORE IN:
Kim Jong il International
Next Story : Zardari Returns to Pakistan From Dubai
Download the Outlook ​Magazines App. Six magazines, wherever you go! Play Store and App Store