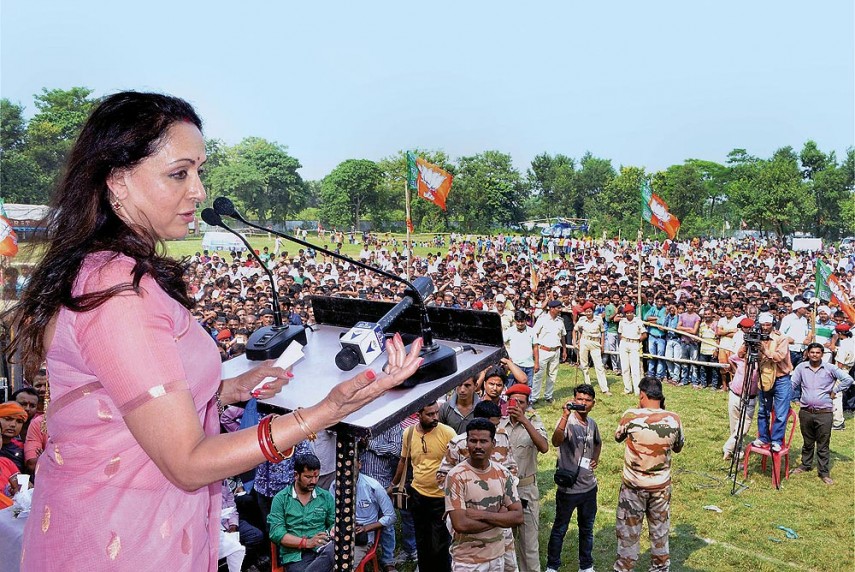 Actor and Mathura MP Hema Malini today hit out at opposition parties over their attack on Prime Minister Narendra Modi, saying it only indicates he is becoming more popular as they are all joining hands to target him.

"He is becoming more and more popular among the people, poor, farmers and everybody else. They do not know how to attack. They are joining hands to attack (the PM)," she told reporters outside Parliament.

She was asked about the remarks of Samajwadi Party leader and Uttar Pradesh minister Azam Khan who yesterday compared Modi to the mythical demon king Ravana.

Without taking Modi's name, Khan during an election rally had said, "The king who rules over 130 crore Indians goes to Lucknow to burn the effigy of Ravana but he forgets that the biggest Ravana is not in Lucknow but lives in Delhi."

On BJP raking the Ram temple issue even after Modi had said that the UP elections would be fought on the development agenda, Hema Malini said one should not look only at the temple issue but also focus on other developmental aspects like Digital India.

"You should not take only Ram temple issue only. There are so many other issues. So much development is taking place in the entire country, one should see that. Especially Digital India and others, all these one should appreciate instead of continuously critisising a person who is doing such good work. He has made such a big name for our country," she said.

When asked about her party's prospects in the upcoming Uttar Pradesh Assembly polls in Mathura, she said, "We will definitely win Mathura."

On Mulayam Singh Yadav's remarks that there were no differences between him and Akhilesh Yadav, and that the SP patriarch would start campaigning from tomorrow, the BJP MP said during elections every party will say good things about their party.

"These things will happen during elections. Every party will say good things about themselves. Everybody is coming together to attack our Prime Minister. I'm sure, he (PM) is doing very well. People are very happy with whatever is happening from our (BJP's) side," she said.