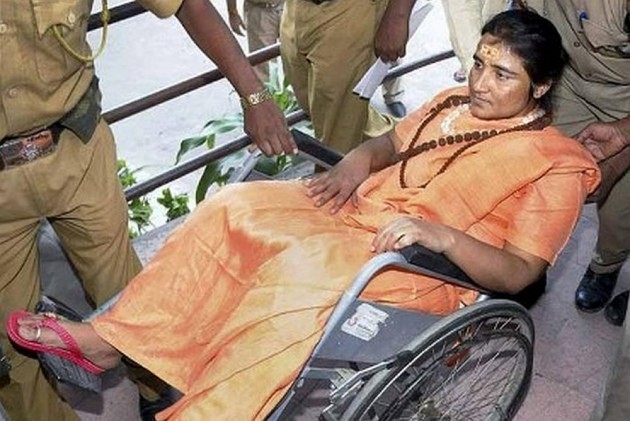 Out on bail in the 2008 Malegaon blast case, Sadhvi Pragya Singh Thakur today alleged she was "falsely implicated in the case to endorse the bogey of saffron terrorism, a term coined by erstwhile Home Minister P Chidambaram."

Sadhvi (44), who was granted bail by the Bombay High Court on Tuesday, was released from judicial custody after the bail formalities were completed in the afternoon.

She is currently undergoing treatment at Khushilal Ayurvedic Hospital here for cancer.

The high court granted bail to Sadhvi holding that prima facie no case was made out against her.

The high court had asked her to furnish cash surety of Rs five lakh and surrender her passport to the NIA. It had also directed her not to tamper with the evidence and to report to the NIA court as and when required.

Addressing a press conference at the hospital, Sadhvi alleged the Mumbai ATS, which probed the case earlier, had "illegally detained" her and that she was subjected to "severe torture."

"This was certainly a conspiracy hatched by the Congress-led UPA government, which resulted into my nine-year ordeal. It (the conspiracy) was (meant) to endorse the bogey of saffron terrorism, a term coined by P Chidambaram (former home minister). I am innocent," Sadhvi told reporters.

She said the "script of saffron terrorism" was written by the then Congress government.

"Go through the entire script of the so-called saffron terrorism. Entire story was cooked up by the Congress which implicated us," she alleged.

In reply to a question, Sadhvi said, "I was the victim of the Congress' conspiracy. I don't think the current government believes in such conspiracies... However, my case is decided by court."

On the investigation conducted by the ATS and then by NIA, she said, "I don't think any investigating agency is straightforward. The National Investigation Agency is also the same."

Sadhvi alleged that she was detained by the Mumbai ATS on October 10, 2008 and was taken to Mumbai from Surat.

"The Mumbai ATS illegally detained me for 13 days. I underwent severe torture during this period," she alleged.

Sadhvi said she was physically fit before she was "tortured" by the Mumbai ATS.

"I was physically fit. I am a sanyasi. Now, I am dependent (on others) due to the torture inflicted on me by the Mumbai ATS. I am 100 per cent innocent," she told journalists while her supporters shouted slogans of "Bharat Mata Ki Jai."

Six persons were killed and nearly 100 others injured when a bomb strapped to a motorcycle exploded in Malegaon town in Nashik district on September 29, 2008.

Sadhvi was arrested in October 2008 and charged with plotting the blast with a co-accused Prasad Purohit, a former lieutenant colonel. According to the prosecution, the blast was carried out as part of a plan by the Hindu right wing organisation Abhinav Bharat.

Nine other accused in the case are still behind bars.

Continue FREE with Ads Pay Rs. 1 to Read Without Ads
READ MORE IN:
P. Chidambaram National
Next Story : My Finances Are Not Linked To My Husband Or His Company, Says Priyanka Gandhi
Download the Outlook ​Magazines App. Six magazines, wherever you go! Play Store and App Store