Pak Should Abandon Its Futile Quest for Kashmir: India 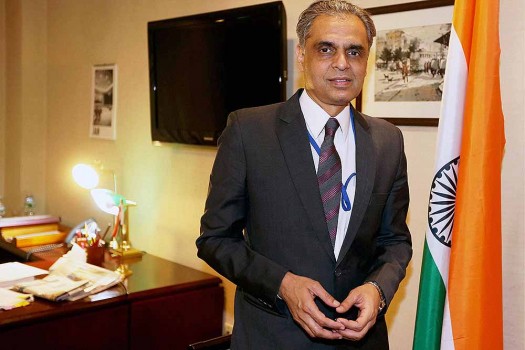 Print
A
A
A
increase text size
Outlook October 06, 2016 10:55 IST Pak Should Abandon Its Futile Quest for Kashmir: India

The "sell-by date" of Pakistan's "anachronistic approach" is long over and the country should "abandon" its "futile quest" for Kashmir, India has said in a strong rebuttal to Islamabad's allegations that New Delhi is escalating the current situation.

India's Permanent Representative to the UN Ambassador Syed Akbaruddin strongly rejected remarks by Pakistan's envoy Maleeha Lodhi, who said during a General Assembly debate on 'Report of the Secretary General on the Work of the Organisation' that India has created conditions that pose a threat to peace and security in the region by its recent "declarations and actions."

Akbaruddin responded sharply by saying that Pakistan's claims in the UN are finding no resonance and it should abandon its quest for Kashmir, which is an integral part of India.

"Our response to Pakistan is consistent. Abandon your futile quest. The state of Jammu and Kashmir is an integral part of India and will remain so," Akbaruddin said asserting that no amount of "misuse" of international platforms by Pakistan will change that reality.

"The sell-by date of Pakistan's anachronistic approach is long over," he said yesterday.

Akbaruddin said claims by Pakistan, a global epicenter of terrorism, on Kashmir find no resonance amongst the international community, with Pakistan Prime Minister Nawaz Sharif raising the Kashmir issue in his General Assembly address also finding no support.

"We have heard one such lone voice again a short while ago, making claims to an integral part of my country. This comes from a country which has established itself as the global epicenter of terrorism. Such claims find no resonance amongst the international community," he said.

The Indian envoy emphasised that during the recently concluded high-level UN General Debate, there was "a singular lack of support" for Sharif's "baseless claims".

In a reference to the surgical strikes conducted by India, Lodhi said "in the past few weeks India has engaged in unprovoked shelling across wide territory along the Line of Control. This continues to this day and even as I speak."

Lodhi dwelled at length on Kashmir in her remarks to the General Assembly, saying Pakistan is ready to engage with India in dialogue but it is New Delhi which will have to take the first step as India had "escalated" the current situation.

"Pakistan wants peaceful resolution of all outstanding disputes, especially Kashmir, the settlement of which is more urgent today than ever. But it is for India to take the first step because it is India which has escalated the current situation," she said.

Lodhi said India "does not even allow" the UN Military Observer Group in India and Pakistan to 'fully function' according to its mandate and to report to the Security Council.

She said India's "continuing denial" of the right of self-determination to the people of Jammu and Kashmir has sparked "another indigenous and popular uprising" in Kashmir and also led to tensions in the region.

"The UN is obliged play a role in bringing an end to human rights abuses and facilitate a peaceful settlement of the Kashmir dispute in line with the aspirations of the Kashmiri people, through a free and fair plebiscite under its auspices," Lodhi said.

She also reiterated Pakistan's demand for an independent inquiry into the alleged human rights abuses in Kashmir and welcomed the call by the UN's High Commissioner for Human Rights for "unfettered and unconditional access to enable impartial monitoring of the human rights situation there."

She also blamed India for continuing to reject the offer of good offices of the Secretary General to resolve "longstanding disputes in our region".

Akbaruddin said the international community must address the growing terrorism, which is the most dangerous of scourges faced by nations, yet it looks away.

"We look away as some amongst us stall our collective efforts, as they use terrorists as proxies in their territorial quests," he said in a reference to Pakistan.

Akbaruddin also strongly criticised the world body's inaction to come up with concrete policies and measures to deal with the growing scourge of terrorism.

He said the world's public consciousness is being ravaged daily by incessant acts of terrorism targeting innocent people, civilizational heritage as well as the socio- economic infrastructure of societies, especially in vulnerable developing countries.

"Yet, on the issue of terrorism the UN is yet to come up with a coherent policy let alone take the lead on one of the biggest threats to global peace and security," he said.

The Indian envoy noted that as many as 31 entities within the United Nations deal with some aspect of countering terrorism, saying this is a classic example of “too many cooks spoil the broth.

"This is clearly the case as coherence and coordination is missing. It is near impossible to argue the case of relevance of the UN on the issue of terrorism where even adoption of an international norm to 'prosecute or extradite' terrorists evades us despite 20 years of talk," he said, referring to the long-pending Comprehensive Convention on International Terrorism.

On peacekeeping, Akbaruddin said the "leitmotif" of the UN is under great stress. "A plethora of tasks and Christmas tree mandates without adequate funding; departure from well-established principles of impartiality; avoidance of the primacy of politics and focus instead on 'band aid' solutions through peace keeping; and an unwillingness to walk away from quagmires into the sunset; are all part of the burgeoning philosophical dilemma facing peace keeping," he said.

He also voiced concern over the "appalling" cases of sexual exploitation and abuse by peacekeepers.

"Peacekeepers turning into predators is our worst nightmare come true," he said.