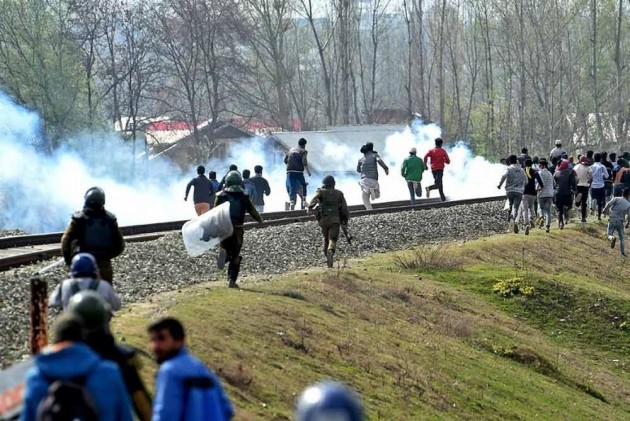 Two government schools designated as polling stations for Wednesday's bypoll to Anantnag Lok Sabha constituency were set afire in the fresh spiral of violence after polling in Kashmir where prohibitory orders were today imposed in Budgam and Ganderbal districts.

With the violence continuing unabated, the PDP candidate from Anantnag Lok Sabha constituency asked the EC to postpone the bypoll.

At a press conference called at the Chief Minister's Fairview residence, PDP leader and candidate for Anantnag Lok Sabha seat Tassaduq Mufti told reporters, "My appeal to the Election Commission is to postpone the polls till the situation improves. It is my request".

Asked if he would withdraw from the contest if the Election Commission did not postpone the polls, the cinematographer-turned-politician said, "If my withdrawing helps in postponing the elections to a more favourable time, I am happy to withdraw."

He, however, made it clear that he would go ahead with the contest if the commission rejected his appeal.

The 45-year-old PDP leader refused to comment on the opposition National Conference charge against the state government that it had failed to provide safe environment for the polls.

Asked if he agreed with the Chief Minister's assertion that only five per cent people were making trouble in Kashmir, her younger brother evaded a direct reply.

Mufti also dismissed suggestions that the violence in Kashmir was a reflection of the "anger" against the PDP for allying with the BJP.

Latching on to his demand for postponement of polls, NC leader Omar Abdullah said it was an "indictment" of Chief Minister Mehbooba Mufti.

"Tassaduq's statement is an indictment of his sister @MehboobaMufti's government and its abject failure. How can the BJP not see this," the former chief minister posted on twitter.

Omar also said that the Election Commission was well within its powers to postpone or countermand the Anantnag election but if so Mehbooba Mufti must resign and the Governor should take charge.

Security forces were today deployed in strength in Srinagar city, a day after eight persons were killed in firing by security forces to quell stone pelting mobs during polling for the Srinagar Lok Sabha constituency.

A police official said that a government school building was set on fire by miscreants in Paddarpora area of Shopian district late last night.

He said the school building, which was designated as polling station, suffered partial damaged in the incident.

In another incident, miscreants torched another school building in Arihal area of Pulwama district last night, the official said, adding the fire was put out by police personnel with the help of local residents.

Anantnag constituency, spread over four districts of Kulgam, Pulwama, Shopian and Anantnag, is scheduled to go to polls on Wednesday.

Police said restriction on the assembly of four or more persons under Section 144 of CrPc has been imposed in Budgam and Ganderbal districts to maintain law and order.

Normal life was, meanwhile, affected across the Valley due to the strike called by separatists. Shops, fuel stations and other business establishments were shut, while attendance in banks and government offices was low, the official said.

Internet services remained suspended for the second day today. Public transport was off the roads, while private transport was minimal.

Kashmir University and Islamic University of Science and Technology have postponed all examinations scheduled for today.