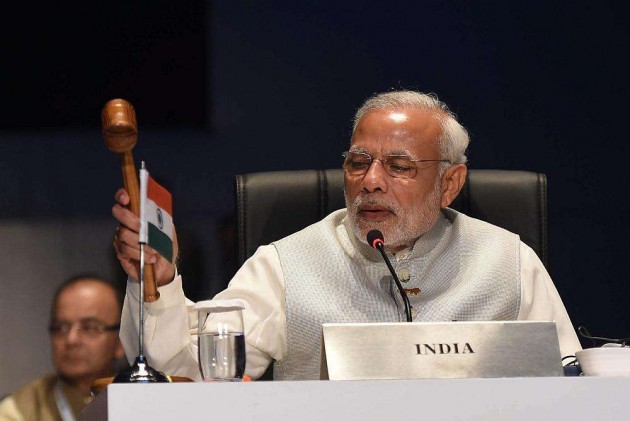 "Unity is our biggest strength... We have to move forward with the mantra of unity, peace and harmony," he asserted at an event marking the 140th birth anniversary of Patel, against the backdrop of protests by artistes, writers and scientists over alleged "rising intolerance" after the Dadri lynching, beef row and other incidents.

Modi also used the occasion to take a dig at dynastic politics, saying it had become a bane of our politics and recalled that Patel never promoted any family member in political life.

At the National Integration Day to mark birth anniversary of India's first Deputy Prime Minister, where Modi flagged off 'run for unity', Modi asked people to take forwards Patel's message that the nation can sacrifice anything for its unity.

"If the country has to move forward and attain new heights of development, then the first guarantee is.... Irrespective of our language and attachment of our feelings and ideology to any inspiration or system from Kashmir to Kanyakumari and Atak to Cuttuck, if our goal is to take Mother India to new heights in the world, then the first condition for that is unity, peace and harmony.

"If 125 crore Indians with the mantra of unity, peace and harmony walk one step together shoulder to shoulder, then the country will move 125 crore steps in one go.

"Our strength is a nation bound together by unity and which can sacrifice everything for unity and this is the message of Sardar sahab," he said, recalling that Patel's life was dedicated to national unity.

The Prime Minister also announced that 'Ek Bharat Shreshtha Bharat' scheme will soon be launched under which one state will choose another state each year and then promote its language and culture.

"I have formed a small committee which is preparing its modalities," he said.

At the beginning of his speech, Modi also remembered former Prime Minister Indira Gandhi on her death anniversary, saying she sacrificed her life on this day and it cannot be forgotten.

Modi said it was not for us to evaluate the works of great people but to remember their contributions and to seek inspiration for generations to come.

He said after philosopher and jurist Chanakya, Patel can be credited for consistently working for national integration.

Addressing the event at Rajpath, he said while several people may claim credit for providing reservation to women, it was Sardar who proposed 50 per cent reservation for women in the Ahmedabad Municipal Corporation when he was the mayor of the city in the 1930s in a bid to empower them.

Recalling Patel's contribution, he said while the British were playing a divisive game, the country's first Home Minister worked overtime for national integration by making the princely states accede to the Union of India.

"He was called iron man not because someone gave him a certificate. It was because of the decisions he had made with an iron grit," Modi said.

The Prime Minister said while Patel worked to give us 'ek Bharat' (One India), it was now our duty to turn it into 'shreshta' (best) Bharat.

The Prime Minister recalled Patel's initiatives as mayor of Ahmedabad during the 1920s, including a campaign for cleanliness which continued for 222 days, inviting the appreciation of Mahatma Gandhi who was fond of cleanliness.

Modi later administered pledge to those present on national integration and ensuring internal security of the nation.

Home Minister Rajnath Singh said the concept of national integration is also present in ancient scriptures. He said India's boundaries were defined ages ago but it was Patel who worked to give them a definitive shape.

Describing Sardar as the architect of modern India, he said Patel ensured unity of the country which helped it prosper. "Now we should put in our best to maintain it," he said.

Naidu lamented that Patel was not given his due in Indian history "for whatever reasons".

"Now we must work to live up to his philosophy of unity and integrity," he said.