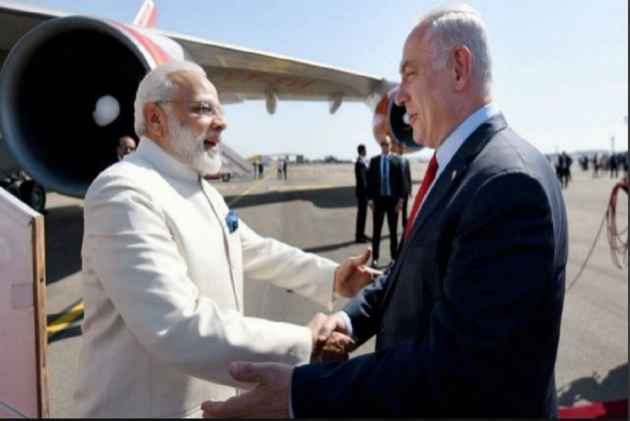 Prime Minister Narendra Modi has said those who believe in humanity and civilised values must come together and defend it at all costs as he called for resolutely opposing the evils of terrorism, radicalism and violence that has plagued the world.

"Yad Vashem is a reminder of the unspeakable evil inflicted generations ago," Modi said in a press statement along with his Israeli counterpart Benjamin Netanyahu.

Modi, who laid a wreath at the Yad Vashem Memorial museum where he paid tributes to over six million Jews killed by Nazi Germany, said the memorial is a tribute to "your unbreakable spirit to rise above the depths of tragedy, overcome hatred and forge ahead to build a vibrant democratic nation."

"Yad Vashem tells us that those who believe in humanity and civilised values must come together and defend it at all costs. As such, we must resolutely oppose the evils of terrorism, radicalism and violence that plague our time," he said.

On his part, Netanyahu said the two countries must stand together to fight the menace of terrorism.

Describing India and Israel as "sister democracies", he said, "We can do great things together."

Modi said the link between the people of the two sides goes back to thousands of years when the first Jews landed on India's south-western coastline. Since then, the Jews have flourished, and their traditions and practices thrived in India.

"We are proud of jewish sons and daughters of India like Lt. General J.F.R. Jacob, Vice Admiral Benjamin Samson, Master architect Joshua Benjamin, and film actors Nadira, Sulochana, and Pramila whose diverse contributions have greatly enriched the fabric of Indian society," he said.

Indian Jews are a living and vibrant connect to this shared history, he said, adding his visit to Israel celebrates this ancient bond between communities across both the nations.

The ties between the two nations have seen rapid growth since the establishment of full diplomatic relations a quarter century ago, Modi said.

"Over coming decades, we want to frame a relationship that transforms the landscape of our economic engagement," the Prime Minister said.

He said India is the world's fastest growing large economy and its focus on using technology and innovation to meet development priorities provides productive scope to expand academic, scientific & research, and business links with Israel.

"We also want to put in place a robust security partnership to respond to shared threats to our peace, stability and prosperity. I will work with Prime Minister Netanyahu to craft and build a clear action agenda to realise these objectives," Modi said in the statement before a dinner hosted by his Israeli counterpart at the PM's residence here.