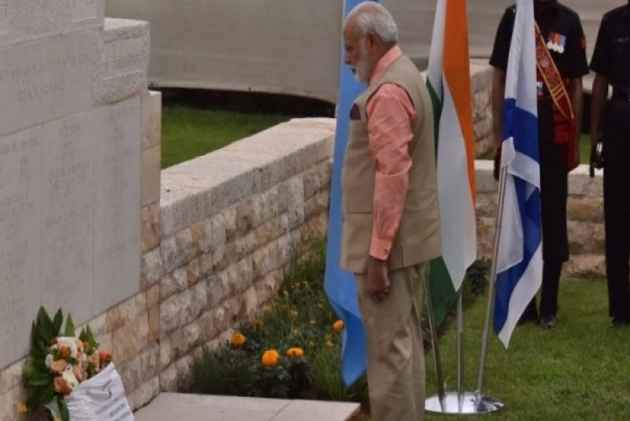 Prime Minister Narendra Modi along with his Israeli counterpart Benjamin Netanyahu on Thursday paid homage to fallen Indian soldiers of World War I at the Haifa Cemetery .

The Battle of Haifa in 1918 is considered to be the last major cavalry campaign in military history where both prime ministers paid wreath on the two grave areas - one is for the Hindu soldiers and one for Muslim soldiers.

Haifa is the third largest city of Israel and is a UNESCO World Heritage Site.

Indian Prime Minister Narendra Modi and his Israeli counterpart, Benjamin Netanyahu, on Wednesday addressed the Indian Diaspora in Israel on the second day of his historic visit, asserting that their 70-year-old relationship is dependable, free and strong.

"In 70 years, for the first time, the visit of an Indian Prime Minister to Israel is in itself a moment of celebration and a moment of introspection too... We have met after a long time. It may have been only 25 years since we established diplomatic relations, but our ties go back hundreds of years. Our ties are a sign of our friendship and dependability. Our festivals have similarities. Last night we were chatting late after dinner. Prime Minister Benjamin Netanyahu gave me a photograph of Indian soldiers from World War II who helped free Jerusalem," Prime Minister Modi told the Indian community at Tel Aviv Convention Centre.

Later in the day, PM Modi will be attending a lunch with CEOs and then will be leaving for Germany at 5 p m local time.

Calling the India-Israel ties, "a partnership made in heaven," Israeli Prime Minister Benjamin Netanyahu, during the community event, described the Indian Jews as a "bridge" between the two countries and expressed his admiration towards the people.

Addressing around 5,000 Indian origin people in Tel Aviv, Netanyahu said, " Prime Minister (Modi) and I have decided on a vast programme to bring our partnership to new heights, but we always remember that there is a human bridge between us --- you. We admire you, we respect you, we love you and here is what is happening today."

Neytanyahu stressed the importance of cultural exchanges between the two countries and said that this is the one area where it really guarantees the future of India and Israel ties.

"We have decided to cooperate in so many areas, but there is really one area that really guarantees the future and PM Modi speaks of it all the time, it's the young people, the young people of India and Israel," he said.

"These are the Jews of India, they love Israel, they love our friendship and we are in a historic meeting, two ancient people ceasing the future," he added.(ANI)