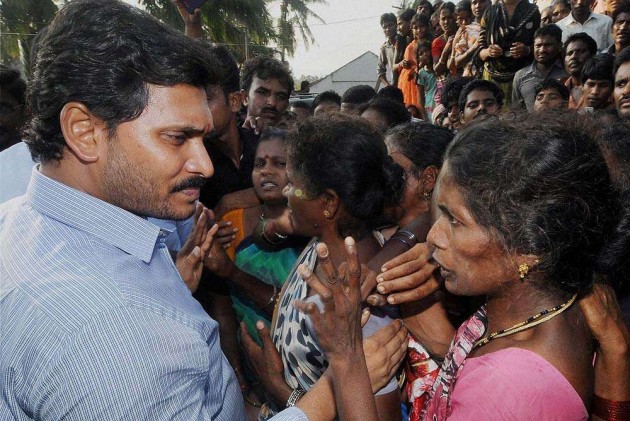 The Andhra Pradesh police today foiled the indefinite fast launched by YSR Congress President Y S Jagan Mohan Reddy here seeking special category status for the state, following concerns over his deteriorating health, even as his party vowed to continue to push for the cause.

A team of policemen forcibly shifted Jagan to a government hospital in Guntur in the early hours, where doctors administered him intravenous fluids.

The doctors, who monitored the Opposition leader's health, said earlier that ketones rose in his body and that it may lead to kidney-related and other health complications.

They suggested Jagan, who had launched his fast on October 7, take liquid diet and also rest for his health to improve.

Condemning the police action as "a heinous act", the YSRCP today announced an agitation programme till October 21 and also sought an appointment for Jagan with Prime Minister Narendra Modi on October 22.

Modi is scheduled to lay the foundation stone for Andhra Pradesh's capital city of Amaravati on October 22.

"We will take out a protest march tomorrow to the Chief Minister's camp office (in Vijayawada) condemning the police action in foiling the fast of our leader," YSRCP spokesperson Ambati Rambabu told reporters.

The YSRCP President will be writing a letter to the Prime Minister seeking an appointment during his visit to the state on October 22 and "he (Modi) will be reminded of the promise of according special status to the state."

"The agitation programme will be held from October 17 to 21 seeking special status and the party will continue to mount pressure for fulfilling their demands. On October 18, rallies will be held at all Assembly constituency headquarters and on the next day party cadre and sympathisers will picket government offices.

"There will be candle light rallies on October 20 and on the eve of Prime Minister's arrival, there will be dharnas at all bus depots," Rambabu added.

The promise of special category status was made to Seemandhra (new AP) by the then Prime Minister Manmohan Singh in Parliament during state bifurcation last year.

YSRCP, Congress and the Left parties have been training guns on the ruling TDP-BJP alliance for not granting special status to the state even one year after assuming office.

The Centre has asked NITI Ayog Vice-Chairman Arvind Panagariya to look into the issue.