Pope Creates 17 New Cardinals, Warns Against Those Who 'Raise Walls' 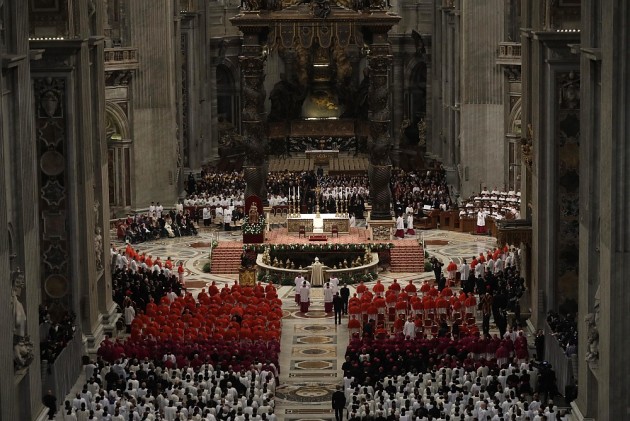 Print
A
A
A
increase text size
Outlook November 19, 2016 18:21 IST Pope Creates 17 New Cardinals, Warns Against Those Who 'Raise Walls'

Pope Francis has decried what he calls a surge of polarisation in the world while welcoming 17 new cardinals from five continents.

During a ceremony today in St Peter's Basilica to formally induct the prelates into the cardinals' ranks, Francis lamented how immigrants, refugees, and people of different races or faiths are increasingly seen as enemies.

Francis cautioned somberly against those who "raise walls, build barriers and label people."

In his homily, the pope said: "We live at a time in which polarization and exclusion are burgeoning and considered the only way to resolve conflicts."

Pope Francis created 17 new cardinals from across the globe today in a time-honoured ceremony, elevating them to an elite body that advises and elects popes.

Three of them are from the US, while others come from corners of the world where the Catholic Church needs a boost.

Dressed in red robes, these "princes of the Church" will knelt before the pontiff to pledge their allegiance in a solemn ceremony known as a consistory.

Thirteen of them are under 80 and therefore eligible to take part in the next secret conclave to elect or become the head of the world's 1.2 billion Catholics. They are known as cardinal electors.

History's first Latin American pope is famed for wanting to reach out to far-flung dioceses often overlooked by Rome and he has shunned European candidates almost entirely, favouring low-key, pastoral figures or men he knows.

The pope gave each man a three-cornered red hat, telling them that the colour symbolises "your readiness to act with courage, even to the shedding of your blood" for the Catholic Church.

They were also be handed a gold ring of their high office.

The unexpected pick of three Americans reverses a trend that saw Francis pass over US candidates in his first two consistories.

By choosing archbishops Blase Cupich of Chicago, Joseph Tobin of Indianapolis and Bishop Kevin Farrell of Dallas, Francis has "engineered what may prove to be a seismic shift in the Catholic hierarchy in the United States," wrote expert John Allen on the US Catholic website Crux.

The three, from Church's "progressive wing", may help counterbalance a strong conservative presence among US cardinals, particularly at a moment when the authority of reform-minded Francis is being challenged by US-led traditionalists.

The youngest of the new cardinals is 49-year old Dieudonne Nzapalainga, the archbishop of Bangui, who organised the pope's 2015 visit to Central African Republic, where Francis opened the first "Holy Door" outside of Rome.