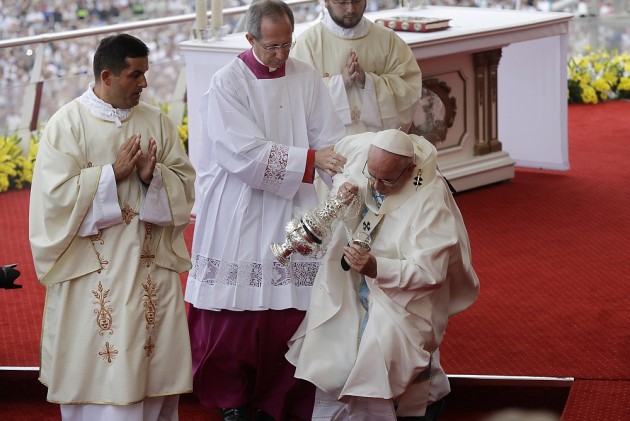 Pope Francis fell today after stumbling on an altar step during a visit to Poland but quickly got back to his feet, without injury.

The 79-year-old Argentine pontiff stumbled, then fell down out of view before being helped to his feet by altar servers.

It is home to the Black Madonna, an icon which Catholic faithful believe has miraculous qualities.

Security was tight at the hill-top shrine following a series of attacks in Europe, with a highly visible police and army presence on the roads leading into the city.

Francis, 79, hopped into an open-topped popemobile for a tour through the cheering crowds.

"We slept so little, but it's worth it, what an atmosphere!" said pilgrim Kate Tor, whose young sons were among the thousands of children who had camped out on the sweeping avenue leading to the monastery.

Teenagers still wrapped in sleeping bags, elderly couples perched on folding chairs outside tents and families with Francis-themed balloons were serenaded by the Argentine pope's favourite tango music before his arrival.

Ambulances and fire-engines were on standby with Polish officials taking no chances with security following the jihadist murder of a priest in a French church on the eve of the pope's five-day trip to celebrate the 2016 World Youth Day.

Shortly after touching down in Poland, Francis said the world was at war but argued that religion was not the cause, insisting the way for people to "overcome fear" was to provide asylum to those fleeing conflict.

Francis left Czestochowa Thursday by helicopter, heading back to to Krakow where he will be presented with the keys to the city, before jumping on to a tram which will whisk him to the sprawling Blonia meadow for his first big WYD event.

At his first meeting with youngsters on Wednesday evening at the window of the archbishop's palace in Krakow, he encouraged the thousands gathered below to party.

"Now go and do your duty, make noise all night long!" he finished with a grin.