Aboard the papal plane 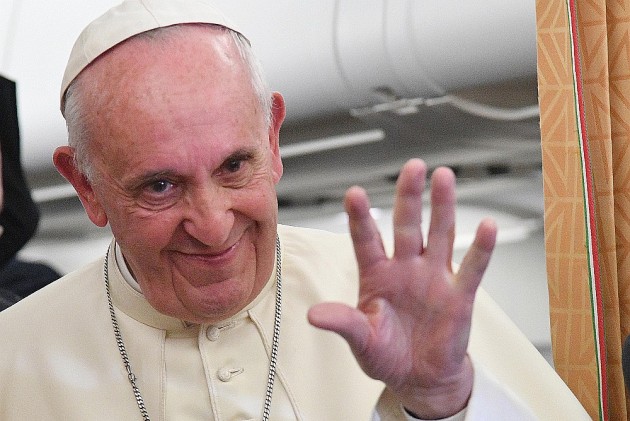 Pope Francis will visit Portugal next year and is "almost sure" he'll go to India and Bangladesh.

Still to be determined is where in Africa he'll visit and whether Colombia's peace accord is "certain, certain, certain" enough to enable a papal visit.

Francis outlined his 2017 travel plans while flying home from Azerbaijan yesterday. Complicating his travel schedule is that next year is already full of appointments with visiting bishops whose 2016 visits were put off due to Francis' Holy Year of Mercy, which ends in November.

But Francis confirmed that as of now, he planned a May 13 trip to the famed Marian shrine at Fatima in Portugal.

India and Bangladesh were planned as well and an Africa trip was under study. The destination depends on weather conditions, time of year and regional political and conflict situations, he said.

Francis had said previously he would visit Colombia if the government and rebels reached a peace accord. Colombians voted yesterday in a referendum to enshrine the accord ending Latin America's longest-running conflict.

Francis said he would go to Colombia "when everything is certain, certain, certain, when they can't go back, when the international community has agreed that no one can make a (legal) recourse, that it's finished. If it's like that, I could go. If it's unstable? It all depends on what the people say. The people are sovereign."

One place Francis likely won't be going is China.

Relations are "good," the Vatican Museums just had an exhibit in China and the Chinese were due to open one on the Vatican, he said. China's president just sent him a gift with a visiting delegation who attended a Vatican conference and there are working groups that are "slowly" discussing relations that were severed under communism.