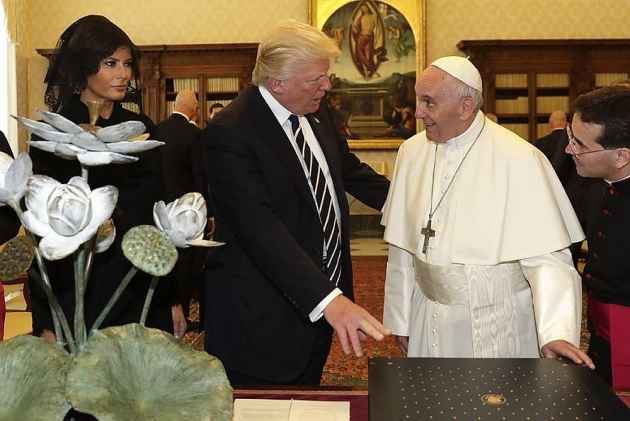 Print
A
A
A
increase text size
Outlook May 24, 2017 18:36 IST Pope Urges Trump to Work For Peace as Smiles Replace Spats

Pope Francis urged Donald Trump to use his US presidency to promote peace around the world as the two leaders swapped sparring for smiles in their first face-to-face meeting at the Vatican today.

Trump's audience with the 80-year-old pontiff, a keenly- anticipated highlight of his first overseas tour, lasted just under half an hour and concluded with both men beaming, for the cameras at least.

"He is something," the president later said of his host. "We had a fantastic meeting."

The Vatican described the discussions as "cordial" and stressed the two men's joint opposition to abortion and shared concern for persecuted Christians in the Middle East.

There was no mention from either side of the two men's profound differences on climate change, migration, the death penalty and other issues.

Trump told his host as he left: "Thank you. Thank you. I won't forget what you said."

The pope had presented Trump with a medallion engraved with an olive tree, the international symbol of peace.

"I give it to you so you can be an instrument of peace," he said in Spanish. "We can use peace," Trump replied.

In a lighter moment, Francis referred to Trump's imposing bulk by asking his wife Melania, "What do you feed him on? Potica?" - a reference to a calorie-laden cake from Slovenia, Melania's country of birth.

Trump presented the pope with several gifts, including a collection of first editions by Martin Luther King and a bronze sculpture.

Francis gave Trump copies of the three major texts he has published as pope, including one on the environment which urges the industrialised world to curb carbon emissions or risk catastrophic consequences for the planet.

Trump, who has threatened to ignore the Paris accords on emissions and described global warming as a hoax, vowed to read them.

In the last year, the two men have swapped jibes and debated on subjects ranging from migration to unbridled capitalism, as well as the environment.

A Vatican statement highlighted "the joint commitment in favour of life, and freedom of worship and conscience."

Since his November election, Trump has pleased the Catholic hierarchy by axing rules protecting tax-funded financing of family planning clinics that offer abortions.

Melania, who is a Catholic, and daughter Ivanka were both dressed all in black with lace veils, in keeping with traditional protocol that is no longer obligatory for visiting female dignitaries.

The audience took place in the private library of the Apostolic Palace, the lavish papal residence that Francis does not use, having opted instead for modest lodgings in a guesthouse for visiting clerics.

Afterwards, the Trumps were given a private tour of the Sistine Chapel and St Peter's Basilica.

The president then called on Italy's president and met briefly with Prime Minister Paolo Gentiloni. "We're loving Italy very much," Trump said at that stop. "It was an honour to meet the pope."

Melania meanwhile visited a children's hospital and Ivanka met women trafficked from Africa for the sex trade on a visit to the St Egidio religious community.

Team Trump was due in Brussels on Wednesday afternoon for meetings with EU and NATO officials before returning to Italy for the G7 summit in Sicily on Friday and Saturday.

Francis and Trump's past spats include the pope describing plans for a border wall with Mexico as not Christian and Trump evoking a possible Islamist attack on the Vatican which would make the pontiff glad to have him as president.

But there have also been conciliatory moves. In 2013, Trump tweeted that "the new pope is a humble man, very much like me" while Francis had promised to judge the man not the image.

Today's meeting nevertheless provided a reminder of their differences in style, Trump arriving at the Vatican in a jumbo-sized SUV that couldn't have been further removed from the modest Fiats and Fords Francis prefers.

Trump's Vatican visit was the third leg of his overseas trip, after stops in Saudi Arabia and Israel and the Palestinian territories.

"No president has ever visited the homelands and holy sites of the Jewish, Christian, and Muslims faiths all on one trip," said US National Security Advisor HR McMaster. Trump was bringing "a message of tolerance and of hope to billions," he said.

The high-profile trip has diverted attention from Trump's domestic pressures over alleged campaign collusion with Russia.

With his poll numbers at a record low, he will be hoping for a boost after rubbing shoulders with the popular pope.