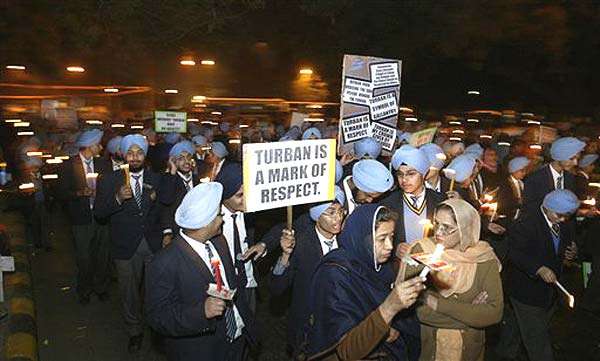 File Photo of an older protests in Delhi

outlookindia.com
-0001-11-30T00:00:00+0553
US Attorney Preet Bharara's office has taken up with the New York City Department of Correction the issue of alleged religious discrimination against an elderly Sikh man, who was asked to remove his turban when he visited a correctional facility here to meet his son.
Gurbhej Singh Sandhu visited the Rikers Island Correctional Facility on numerous occasions since February 2012 to meet his son, who was serving a sentence at the facility.
Sandhu was made to remove his turban every time he went to meet his son even though he explained to security officers that the turban is an essential part of the Sikh identity and removing it is a humiliation and a denigration of the Sikh faith, according to a statement by rights groups United Sikhs.
Sandhu had to comply with the orders of the security officers, who said he would not be able to meet his son if he did not follow their orders.
The legal team of the rights group sent a letter to the city's Correction Department, seeking an explanation and remedial measures for the "mistreatment" of the elderly Sikh.
United Sikhs also filed a complaint with the Department of Justice Civil Rights Commission who then directed the matter to Bharara's office.
The US Attorney's office wrote to the Correction Department seeking an explanation for their acts and alleged religious discrimination against Sandhu.
The office asserted in its letter that the removal of Singh's religious headwear potentially violates provisions of the Civil Rights Act as well as the dress code policy of the department, the group said.
United Siksh noted that the actions of the security personnel are in contravention of the facility's policies and procedures, which exempts religious head coverings from its general prohibition of wearing of hats and head coverings during visits to its facilities.
In the letter sent by United Sikhs to the correction department, Staff Attorney Manmeet Singh said forcing a Sikh to remove his turban is "degrading, cruel and an embarrassment."
He said while safety is a priority for the department, the turban does not pose a physical threat and other non- intrusive ways, like using a metal detector, can be employed to examine the turban for prohibited items like contraband.
Continue FREE with Ads Pay Rs. 1 to Read Without Ads
READ MORE IN:
Preet Bharara International
Next Story : Sena Worker Shot Dead Near Pune
Download the Outlook ​Magazines App. Six magazines, wherever you go! Play Store and App Store