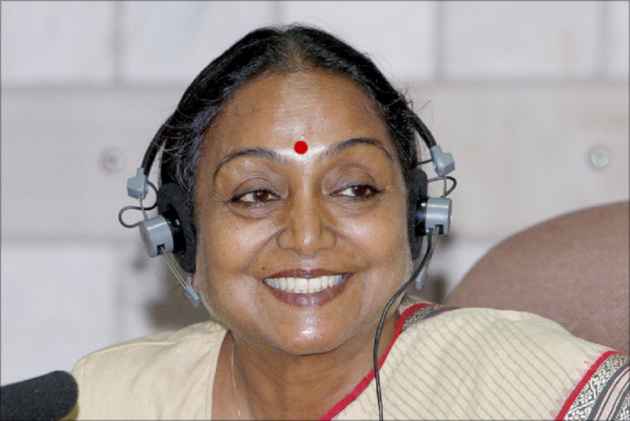 Non-NDA parties have chosen Meira Kumar as their presidential nominee after hectic parley between leaders of non-NDA parties began this morning, hours ahead of a crucial opposition meeting where they were expected to zero in on a joint candidate for the presidential election.

After the JD-U's decision to support NDA presidential nominee Ram Nath Kovind, the Congress stepped up efforts to keep the opposition united as its top brass held discussions with the leaders of a host of other parties.

Cracks appeared in the opposition camp after the JD-U's surprise decision yesterday, as its chief Nitish Kumar was the one who had initiated the process for a joint opposition strategy on the issue.

Sources said a contest for the country's top constitutional post is on the cards as the majority in the opposition sees it an "ideological battle" that has to fought.

"No matter what happens, we will contest the election," a senior left leader said.

Efforts were on to ensure that the NCP did not stray, as the Sharad Pawar-led party held internal discussions to decide on its strategy for the July 17 presidential election.

Top Congress leaders Ghulam Nabi Azad and Ahmed Patel met NCP supremo Pawar at his residence and are learnt to have discussed the opposition plan for the poll.

CPI-M's Sitaram Yechury was also part of the informal discussions, the sources said.

By naming Kovind, a dalit, the NDA has put the opposition camp in a fix as it has now been forced to think of a suitable dalit candidate to oppose Kovind so as not to be branded "anti-dalit" by the ruling dispensation.

The opposition, which had earlier discussed the possibility of pitting former governor Gopalkrishna Gandhi against the NDA candidate, is now looking at a dalit face for the contest. The names of former Speaker Meira Kumar and Prakash Ambedkar, grandson of the principal architect of the Constitution, B R Ambedkar, have been discussed, the sources said.

Kumar yesterday met Congress President Sonia Gandhi along with other senior party leaders, fuelling speculation that the party was willing to support her candidature.

The opposition camp is yet to name its candidate for the presidential poll.

The Congress, which is coordinating the opposition meet, expressed the hope leaders of all the parties which attended the May 26 lunch hosted by Gandhi would be present today.

Opposition leaders also maintained the bloc was united against the ruling BJP and that the JD-U continued to be with it, as its decision was a "one-off" development.

Asked about the Congress's choice for the poll, AICC spokesperson Manish Tewari yesterday said it was a "hypothetical" question.

"There will be a far clear, coherent and an articulate answer available after the opposition meeting," he said.

Senior leaders from several opposition parties who attended the May 26 meet are expected to be present at today's meeting.

Continue FREE with Ads Pay Rs. 1 to Read Without Ads
READ MORE IN:
Meira Kumar National
Next Story : TATA Believed to be In Talks With Govt For Full or Partial Privatisation Of Debt-Laden Air India
Download the Outlook ​Magazines App. Six magazines, wherever you go! Play Store and App Store