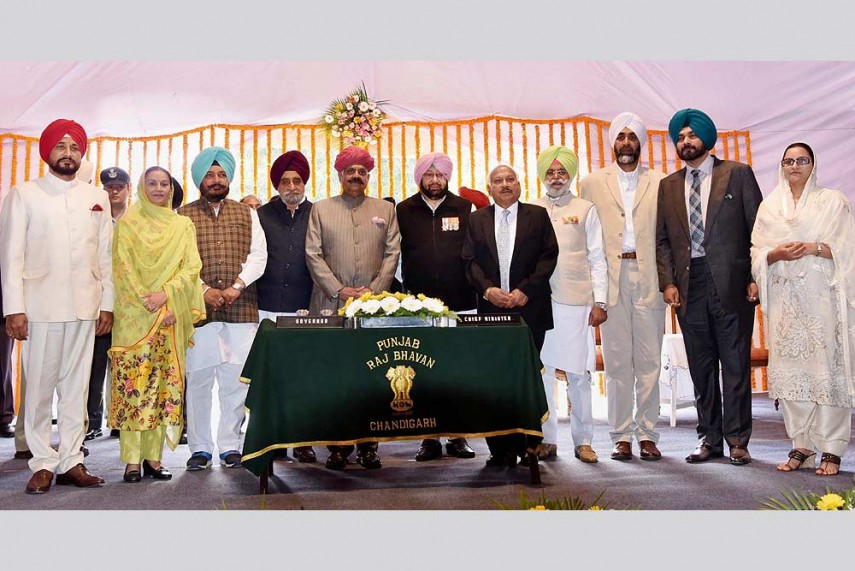 Capt Amarinder Singh, who took over as the Chief Minister of Punjab today, would hold the charge of home affairs and some other departments while senior minister Brahm Mohindra has been alloted the health ministry.

Navjot Singh Sidhu, about whom there was much speculation that he was in the reckoning for deputy chief minister's post, has been given the Local Government Department and Manpreet Badal is the new Finance minister of Panjab.

He said that Amarinder would hold the portfolios of General Administration, Personnel, Home Affairs and Justice, Vigilance and other departments not assigned to any other Minister.

Mohindra, senior most minister after Amarinder, has been given the portfolios of Health and Family Welfare, Research and Medical Education and Parliamentary Affairs.

Sidhu has been allotted the portfolios of Local Government and Tourism and Cultural Affairs, Archives and Museums.

Manpreet has been assigned the departments of Finance, Planning and Employment Generation. An estranged nephew of former Chief Minister Parkash Singh Badal, Manpreet had earlier held the Finance Department in the erstwhile Akali government in 2007.

Forests, Printing and Stationery, Welfare of SCs and BCs would be looked after by Sadhu Singh Dharamsot.

Tript Rajinder Singh Bajwa has been given the charge of Rural Development, Panchayats, Water Supply and Sanitation while Rana Gurjit Singh has been allotted the Irrigation and Power portfolio.

Charanjit Singh Channi has been allotted the charge of Technical Education and Industrial Training.

Meanwhile, Aruna Chaudhary, Minister of State (Independent Charge) has been assigned the portfolios of Higher Education and School Education.

After guiding the Congress to a resounding victory, Amarinder Singh was today sworn-in as the Punjab chief minister along with nine ministers.