"A so-called religious cult is holding the state of Haryana at ransom, solely because the BJP government in the state is in cahoots with it," he tweeted. 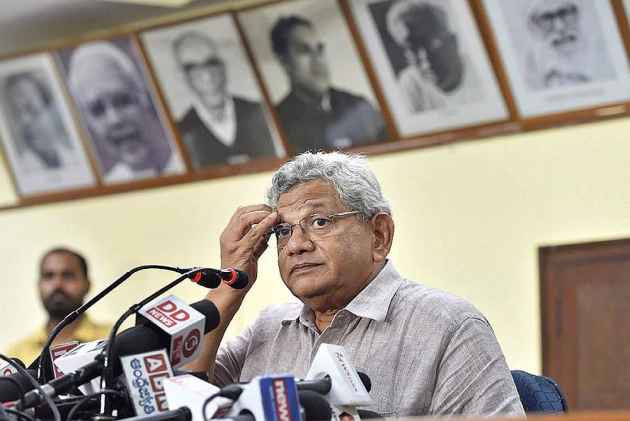 Ahead of the judgement of a special court in a 15-year-old sexual exploitation case against Dera Sacha Sauda chief Gurmeet Ram Rahim, Communist Party of India (Marxist) (CPM) leader Sitaram Yechury has condemned the Bharatiya Janata Party (BJP) for being hand-in-glove with a "so-called religious cult" that is "holding the state of Haryana at ransom."

"A so-called religious cult is holding the state of Haryana at ransom, solely because the BJP government in the state is in cahoots with it," he tweeted.

A so-called religious cult is holding the state of Haryana at ransom, solely because the BJP govt in the state is in cahoots with it.

Meanwhile, Section 144 has been imposed in Chandigarh and as many as 74 trains have been cancelled for today in view of law and order situation in Haryana.

The possibility of an outbreak of violence in Haryana has also affected the cost of air travel. Reportedly, the fare from Delhi to Chandigarh has risen up to as much as Rs. 11,000.

Ram Rahim, the self-styled godman who has a huge number of followers in Punjab, Haryana and other states, will appear before the court later in the day.

Ram Rahim had asked his supporters, who have been camping in Panchkula, to return to their homes and maintain peace.

The Dera Sacha Sauda chief released a video message asking his supporters, camping in Panchkula, to go back home. He also asked his supporters to respect the law and maintain peace.

"I appeal to everyone to maintain peace. I had earlier also asked the Dera followers, who have gone to Panchkula, to return to their home. I will go to court. We all should respect law and maintain peace," he said in the video message.

Around 53 companies of the paramilitary forces and 50,000 personnel of the Haryana Police have also been deployed. In addition, the Army has also been alerted.

The administration is also asked to take a stringent action if anyone tries to break the law.

The Dera Sacha Sauda chief, Gurmeet Ram Rahim, is accused with rape charges of a female devotee in 1999.

On August 17, the special CBI court of Panchkula concluded hearing in the case, but reserved pronouncing the verdict for August 25.

The CBI had taken over the investigation in 2002 and the hearing had been going on since 2007.

For the August 17 hearing, Singh was recused from appearing in person at Panchkula by the court. The Dera chief had cited medical reasons for not attending court in person. (ANI)