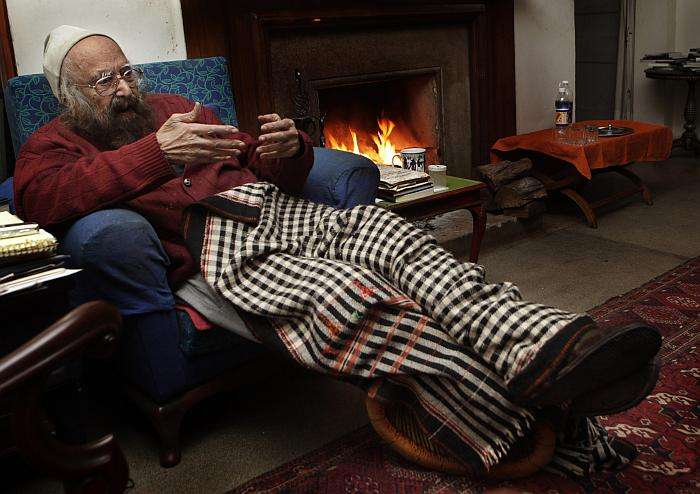 The passing away of the legendary author Khushwant Singh today was condoled by imminent personalities in various fields, through Twitter, Facebook and official statements alike. President Pranab Mukherjee and Prime Minister Manmohan Singh today led the nation in paying tributes to noted author and journalist Khushwant Singh, who passed away today.

The Prime Minister called him a "gifted author, candid commentator and a dear friend who lived a truly creative life."

I am deeply saddened to learn about the passing away of Shri Khushwant Singh.

A prolific writer who made his mark in literature as well as journalism, Shri Singh will be remembered for his sharp insight and unique wit, as well as sense of humour. Shri Singh’s writings delighted generations of readers and he was conferred several awards and national honours including the Padma Vibhushan. His contribution to the nation as a Member of Parliament was also noteworthy. A fearless intellectual and exceptional man, his sad demise leaves a vacuum difficult to fill.

I convey my heartfelt condolences to the members of the bereaved family and his countless fans and admirers. I pray for peace of the departed soul.

I convey my heartfelt condolences to the members of the bereaved family, his friends and admirers. I pray to the Almighty to give them strength and fortitude to bear their loss.

My condolences on the passing away of noted author & journalist Khushwant Singh. May his soul rest in peace.

Mourning the passing of the irrepressible, inimitable Mr Original himself. A great loss for the world of ideas&letters. Khushwant Singh RIP.

I most fondly remember playing tennis with Mr Kushwant Singh.And his hearty laughter over certain shots! He played to enjoy and not compete!

He was my professor in Law College in Lahore. I have always seen him as a legendary icon. It's a big loss to the literary world as well. His account of Sikhs was one of the most credible text available on the subject," Nayar told reporters.

He never minced his words and was a courageous person. I remember once having dinner with him when he showed up his tremendous knowledge about Urdu poetry. What a lovable man he was!

Gutted to hear about the death of Khushwant Singh. He was my mother's editor, penned a beautiful obituary on her. A great man. My Tributes.

Rest in peace, #KhushwantSingh. What a life you lived,& what stories you told.The Punjabi who lived as he wrote,& leaves a place all his own. He wrote in a voice uniquely his own,in a style that became his signature.Love him or hate him,he was impossible 2ignore.RIP,#KhushwantSingh

I have this unreserved gratitude for him. I was a kid, 20-year-old in a newspaper, and he really picked us up from nothing. He gave us opprtunities which were undreamt of for any young person wanting to do anything. For him to recognise and bless you was virtually the hand of a benedict.

Khushwant Singh. End of an era. Only KS could say 'There's no condom for a pen. And prove it!

Apart from being a popular writer and utterly fearless man, what I found unusual in him, very rare in others was his great desire to build other people. He was always praising new authors, giving time to them. He was frank in his verdicts. To think Delhi, the world of literature and newspapers will be without him is a very very hard thought to accept!

We lost a national treasure in every sense of the word today. Go out and get a #KhushwantSingh book. It just might change your life.

As a journalist and writer he always stood for strengthening secularism and was a frontline soldier in the battle against fanaticism and fascism. Apart from his contributions as author, journalist and commentator, Singh would be remembered as a strong defender of secular values.

So khushwant singh goes,like we all must. What a life led! a 100 would have been excellent but he gave us 99 & we must be thankful for that.

Khushwant will be remembered for this great history of the Sikhs. He was a very generous man. His bravest act was to take on Bhindranwale. Khushwant's stupidest act was to support Sanjay and Maneka Gandhi. This we can forget, and remember his books, his warmth, his generosity. There was nothing petty or insecure about Khushwant; unlike other famous Indians, he welcomed jokes at his own expense, and criticism too.

He was much senior to me but we shared a great rapport. He lived a great life and the died the way he wanted to. It should be celebrated and not mourned.

Oh no Khushwant Singh is no more. He made our lives so much richer by his literary contributions. “With Malice towards one and all” RIP

RIP,Sir! Grew up reading The Illustrated Weekly of India & his wicked humor. Mr #KhushwantSingh remained the quintessential lover of life.

The light died out in his bulb just short of a century. The spunky sardar with the sassy prose now belongs to the ages. RIP Khushwant Singh.

Truth, Love & A Little Malice. An apt title for a book & for a life! A rare man with a rare capacity to look inwards. RIP, Khushwant Singh.

Its extremely saddening to know that legendary Khushwant Singh is no more. In this grave hour, I extend heartfelt condolences to his family.

Saddened by the demise of Sh. Khushwant Singh. Literary world has lost a shining jewel. Condolence to his family.

The death of Sardar Khushwant Singh has come as a great personal shock and loss to me. I have grown up reading him as a writer and a journalist. Moreover I felt closer to him as a Punjabi who had been a great witness to some great and tragic events in history. His vivid depiction of the tragedy of partition and the triumph of human values in his epic novel Train to Pakistan revealed the great genius and a great human being in him. I will always miss him. May his soul rest in peace.

In the death of Khushwant ji, we have lost a true stalwart of India and a superb author and journalist. He was one of the greatest Indian nationals we have seen. Khushwant ji led a very illustrious and distinguished life and I learn that he wrote his last column only two weeks ago. With almost 100 books to his name and countless pieces in the press he has left a remarkable legacy. Our affection for him was boundless. We will miss his soaring intellect, his talent, his enthusiasm and his wonderful sense of homour.

The contribution of Khushwant Singh to the Sikh issues will always be remembered and his 'History of the Sikhs' will forever remain the most popular reference point for Sikh historical studies.