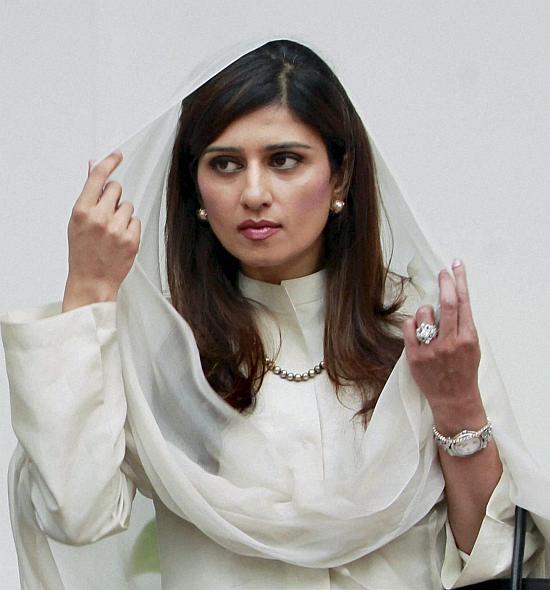 outlookindia.com
-0001-11-30T00:00:00+0553
Pakistan Foreign Minister Hina Rabbani Khar's husband Feroz Gulzar has rubbished rumours about differences in their relationship as a campaign to malign his wife.

Gulzar, an industrialist from Punjab province, was quoted by Geo News channel as saying that the campaign to malign his wife was "rubbish" that does not merit comment.

He further said there was "no premise for such trash" and that he would not offer any comment on "social media gossip".

There has been considerable speculation about the fate of Khar's marriage to Gulzar since a little-known Bangladeshi tabloid claimed without any proof, quoting "western agencies", that she was allegedly involved in a relationship with Bilawal Bhutto, son of President Asif Ali Zardari.

The weekly had alleged, again without providing any sources, that the 35-year old Pakistan foreign minister was poised to end her marital relations with millionaire businessman Firoze Gulzar, from whom she has two daughters named Annaya and Dina.

Asked about rumours of his separation from his wife, Gulzar said no such issue was being considered by him. He further said it was unfortunate that the persons behind such gossip had dragged his two young daughters into the affair.

Gulzar said it was regrettable that there is no system in Pakistan to identify those responsible for "such rumour-mongering".

He brushed aside a suggestion that US authorities should be asked to look into the matter, saying, "It wouldn't be appropriate to ask them for a probe".

Khar, who is currently in the US as part of President Asif Ali Zardari's delegation to attend the UN General Assembly session, was quoted by Geo News as saying that she too would not comment on such a "reprehensible matter".

Born on November 19, 1977, Hina Rabbani Khar hails from an influential feudal and landowner family and is the daughter of politician and landowner Nur Rabbani Khar and the niece of Ghulam Mustafa Khar, a former Governor of Punjab.

Her entry into Pakistani politics has a typical South Asian angle, as her landowner father Nur Rabbani Khar could not contest elections in 2002 because of the new law brought in by General Musharraf that required all candidates to hold university degrees. Hina Rabbani Khar was elected as the MP from  her father's NA-177, Muzaffargarh-II constituency in Punjab on a PML (Q Group) platform against Pakistan Muslim League.

Bilawal Bhutto Zardari at 24 (he was born on 21 September 1988) is 11 years younger than Khar, and is the President of the Pakistan People's Party. Apart from many other unsubstantiated, salacious details published by the Bangladesh tabloid, the most incredible is that the relationship has been known to President Zardari at least since September 21, 2011 last year when the then newly appointed foreign minister is supposed to have sent a hand-written message to his son, saying: "The foundation of our relations is eternal and soon we shall be just ourselves."