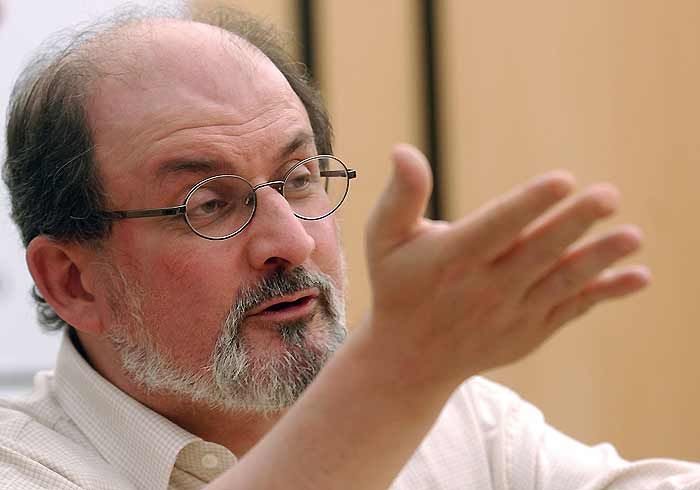 A visit by controversial author Salman Rushdie here to promote Deepa Mehta's film 'Midnight's Children', based on his award-winning novel, was called off at the last minute over security concerns today, evoking strong reactions from cultural and literary circles.

Rushdie who travelled to Delhi, Bangalore and Mumbai without any problem in the last few days, was to attend promotional activities with Deepa Mehta and actor Rahul Bose.

But the author cancelled his trip over security issues. A source close to the development said it was because of  objections raised by the state government and an ultimatum issued by police.

Anticipating the Booker Prize winning author's arrival a few hundred people from minority groups gathered at the Kolkata airport, but dispersed when they learnt from the police that he had called off his trip.

Rushdie's 1988 novel The Satanic Verses had led to a fatwa being issued on his life.

The sources said that Deepa also cancelled her visit to the city where she was scheduled to participate in a discussion on the film at the second edition of Kolkata Literary Meet (KLM) being held at the Kolkata Book Fair.

Asked about Rushdie's security concerns, Joint Commissioner of Police (Hqs) Javed Shamim said, "We did not have any prior information about his arrival. We do not know anything about it."

"The Rushdie ban is an insult to our cultured claims. The unspoken political agenda is probably clear to all, but to ban Rushdie with a valid Indian visa, is West Bengal's shame," he said.

Stating that the freedom of speech and expression was under threat from non-state actors, author Amitav Ghosh said "As a writer the main focus of our expression is through the written word."

He said that since one of Rushdie's books was banned here, it should be made available, adding that in a democratic setup people did have the right to protest.

Produced by Mehta's husband David Hamilton, the film 'Midnight's Children' based on Rushdie's acclaimed novel of the same name, is scheduled to release this Friday.

Rushdie has not only written the screenplay but has also rendered a voiceover in the film which stars Rahul Bose, Shabana Azmi, Seema Biswas, Anupan Kher, Soha Ali Khan and Sarita Choudhury.

Last year, a major controversy erupted after the author had to cancel his India visit to attend the Jaipur Literature Festival following reports of threats to his life.