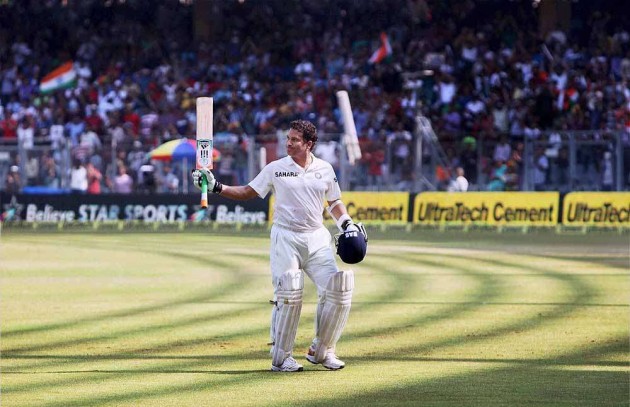 Batting maestro Sachin Tendulkar enthralled with a majestic 74 in his farewell knock as India put themselves on course for a clean-sweep by taking a mammoth 313-run first innings lead in the second and final cricket Test against the West Indies here today.

Millions of Tendulkar's adoring fans waited for a last magical knock from his blade as the 40-year-old batting legend walked into the ground to resume his innings at an overnight 38. He seemed to be in a positive frame of mind as he played an array of breathtaking shots much to the delight of a packed Wankhede stadium.

But the dream three-figure mark eluded the champion batsman in his farewell match but the Indians rode on Rohit Sharma's (111 unbeaten) second consecutive century and Chteshwar Pujara's 113 to pile up an imposing 495 for a 313-run lead.

Spinner Shane Shillingford was the pick of te West Indies bowlers, picking up 5/179 after toiling for 43 overs. Narsingh Deonarine chipped in with two wickets.

At stumps, West Indies were struggling at 43 for three in their second innings, still trailing by 270 runs with seven wickets in hand. With three full days left in the game, the visitors have to bat out of their skin to save the match.

But it was Tendulkar who hogged the limelight for the second day running with a sublime knock which included some of his trademark shots, which got rousing cheers from the crowd and a host of VVIPs including Congress vice-President Rahul Gandhi, state chief minister Prithviraj Chavan and Bollywood superstars Aamir Khan and Hrithik Roshan.

Silence descended at the Wankhede when Tendulkar was dismissed when he thick-edged a Deonarine delivery to Darren Sammy at first slip. The crowd quickly recomposed itself to give Tendulkar a standing ovation as he trudged off the ground one last time.

Earlier, right before the tea break, India was leading by 231 runs.

At lunch, India cruised to 282 for three stretching their lead to exactly 100 runs as Cheteshwar Pujara, batting on 85, looked good for a big knock with Virat Kohli (36 batting) for company.

Starting the day on 38, the maestro Tendulkar looked fluent during his 68-minute stay at the wicket on the day. He faced 118 balls in all, hitting 12 boundaries, all of which were pure class.

He added 148 runs for the second wicket with Pujara, who hit a responsible 113 en route his fifth Test century. Pujara hit 12 fours in his 167 ball knock.

Virat Kohli also contributed his bit with a quickfire 57 while in-form Rohit Sharma looked good during his undefeated knock of 44.