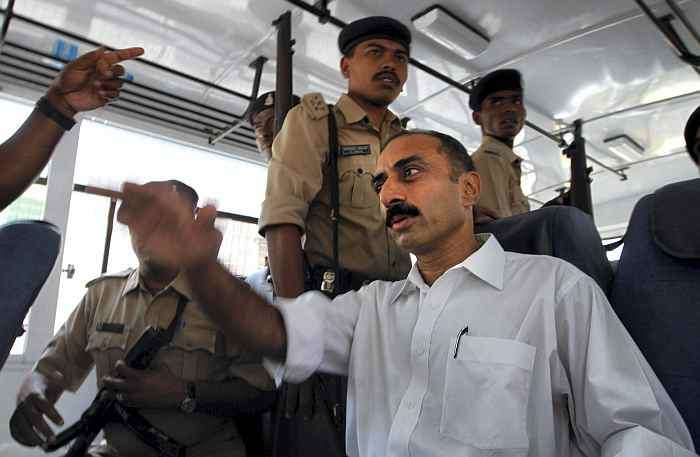 Dismissed Gujarat Cadre IPS officer Sanjiv Bhatt today told the Supreme Court that he was victimised and targeted by the state government, whose strategy was to shoot the messenger for his bold speaking about the handling of law and order situation during the riots of 2002.

"It is a clear case of victimisation. I am being victimised for being bold enough to say I was present in the meeting of February 27, 2002 and heard some words uttered by the then Chief Minister," his counsel and senior advocate Indira Jaising submitted before a bench of Chief Justice H L Dattu and Arun Mishra.

However, she said it is also a fact that his claim of being present in the meeting was denied by the then Police Commissioner of Ahmedabad, the DIG and one of the Bhatt's subordinates, who allegedly had accompanied him in his vehicle to the Chief Minister's office and later accused him of coercing him to sign a false affidavit.

The senior advocate said only Bhatt's driver had stood by his statement that they had gone for the meeting.

She said the Gujarat government was critical of Bhatt raising the claim of his presence in the meeting as late as 2011.

Further, she said that other officers testified while he was deliberately not summoned by the Justice G T Nanavati Commission set by the state government to probe riots cases.

However, the use of word "deliberate" evoked sharp reaction from the bench, which said the Justice Nanavati was a judge of the apex court and it was for him to think whom to summon before the commission.

Jaising corrected herself and said "in his wisdom he did not summon him (Bhatt)". The bench commented "this is the correct expression."

The submission on behalf of Bhatt will continue next week and after that Gujarat Government will get the opportunity to refute the allegations including that there have been a "pattern" since 2002 to deal with the cases of riots by the state machinery.

"The strategy is to shoot the messenger so that he should not carry the informations and the problem will be over," Jaising said while elaborating the manner in which the cases of riots and some encounter killings since 2002 were dealt with by the apex court and some of them shifted to neighbouring Maharashtra for fair and impartial criminal trials.

Jaising said the sacked IPS officer had not only complained about the leakage of information about the proceedings held before the apex court-appointed Special Investigating Team (SIT) to probe the nine cases of riots but was of the view that the hearing before it suffered from disquiet and inequity.

Bhatt, who has filed fresh applications in the pending petitions, referred to the e-mail from the accounts of Tushar Mehta, the then Additional Advocate General of Gujarat, and alleged that instead of working on behalf of the state he was drafting petitions of the accused in the Gulbarg Society case and exchanging them with senior advocates Ram Jethmalani and Mahesh Jethmalani, who were representing the accused.

Two persons targeted for speaking against administration were social activist Teesta Setalvad and Bhatt, she said.

The bench said earlier the prayers in Bhatt's two petitions were to transfer two cases to CBI and now in the application he wants that instead of CBI those cases be handed over for apex court-monitored probe by the SIT.

Jaising said Bhatt was not for quashing of FIRs but for fair and impartial probe and was ready to be hanged only after a fair probe which is incumbent in a democracy.

She said SIT probe is needed today as the CBI is under the supervision of the Centre and the then CM has come to the Centre as Prime Minister and the then law officer of Gujarat has become Additional Solicitor General at the Centre.

She said that the e-mail accounts of Mehta would show how the BJP chief, an RSS functionary and some bureaucrats were coming in the way of administration of justice in the riot cases and encounter cases.

The apex court had yesterday commenced hearing on the pleas of Bhatt seeking apex court-monitored SIT probe into allegation of misuse of state machinery during 2002 post- Godhra riots and the alleged role of top BJP and RSS functionaries and some senior bureaucrats.

The two petitions of 2011 relating to it and fresh applications filed on Monday will come up for hearing again on September 22.

The IPS officer, dismissed from service on August 18 this year, had filed the petitions in the apex court in 2011 against the lodging of FIRs against him by the Gujarat Police.

One of the petitions pertains to an FIR lodged by a Gujarat police constable K D Panth in Ahmedabad alleging that Bhatt had pressurised him to sign an affidavit testifying that the IPS officer had participated in a high-level meeting after the Godhra carnage.

In another FIR, he has been accused of allegedly hacking then state's Additional Advocate General Tushar Mehta's e-mail account. Mehta is currently the Additional Solicitor General of India.

In fresh applications, the sacked IPS officer had also sought to implead top BJP and RSS leaders and senior IAS officers alleging that they were part of a larger conspiracy to subvert the ends of justice.

The apex court had earlier stayed criminal proceedings against the officer.

He has sought fresh investigation against him in all cases with a plea for direction to internet service providers to preserve all data he has put in the applications.