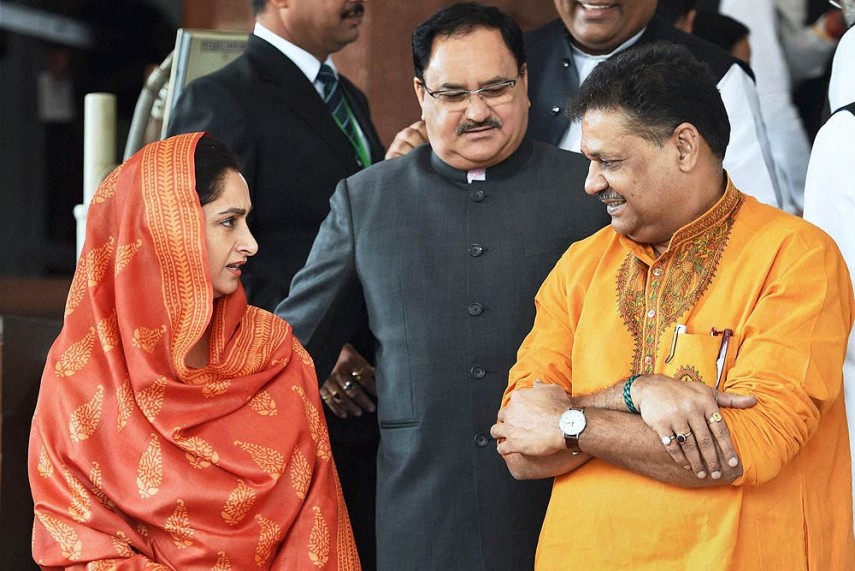 Taking a dig at Navjot Singh Sidhu, union minister Harsimrat Kaur Badal today said the cricketer-turned-politician's oratorical skills were limited to streets or on laughter shows where he reads well rehearsed dialogues but in Parliament he rarely opened his mouth.

Harsimrat said Sidhu, who recently joined the Congress, remains engrossed in bargaining with political parties and is now offering "unbelievable" explanations for his mysterious conduct for all these months after he resigned from Rajya Sabha and BJP which had launched him on the political scene over a decade ago.

The SAD leader said Sidhu had been her colleague in the last Lok Sabha but he remained conspicuous by his absence.

His record of spending of his Local Area Development fund was abysmal, lowest of all the MPs of the state, she said.

Moreover, his performance in parliament had been dismal as he rarely articulated aspirations of Punjabis in the house, she alleged.

"His oratorical skills are limited to streets or on laughter shows where he reads well rehearsed dialogues but in parliament he rarely opened his mouth," she said.

She said Sidhu claimed he did not join Aam Aadmi Party (AAP) as it too wanted to keep him out of Punjab, adding that this is diametrically opposite to what AAP supremo Arvind Kejriwal had claimed.

Kejriwal had made an honest confession that the party had offered the post of deputy chief minister to Sidhu but he was eyeing a higher slot - obviously of chief minister - and hence the deal fell through, Harsimrat claimed.

Since Sidhu had not contested Kejriwal's statement, it goes without saying that for a change, Kejriwal was speaking the truth, she said.

"And if it were so, how could Sidhu say that he was being kept out of Punjab by AAP too," she said.

"Is office of deputy CM of Punjab outside Punjab?" asked Harsimrat adding that either Sidhu does not understand politics or he thinks that credulous people would believe his lies.

Sidhu's claim that Punjabis "hate" the Badals is beyond comprehension, she said.

"Does Sidhu want to suggest that Parkash Singh Badal was elected for the fifth time as chief minister of Punjab because people hate him?" she asked.

Mocking Sidhu's recent statement that Amarinder Singh was like a "father" to him, she wondered whether people had rejected his "newly-adopted father" twice in 2007 and 2012 polls because of their "profound love for him".