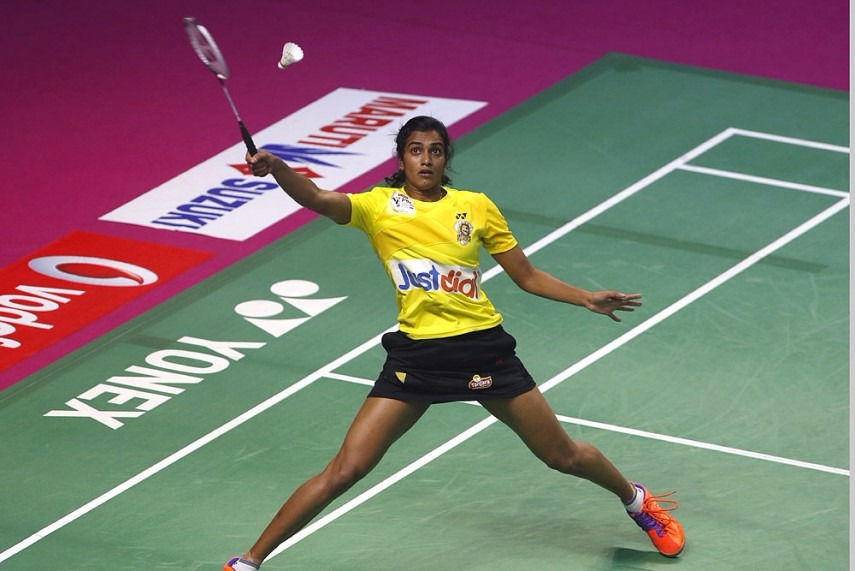 Sindhu, who had reached a career-best World No.2 after winning the India Open by beating Olympic champion Marin in New Delhi, went down 11-21 15-21 in a lopsided quarterfinal match.

Praneeth, however, battled for an hour and 11 minutes to eke out a 15-21 21-14 21-19 win over eighth-seeded Tanongsak Saensomboonsuk of Thailand. The Syed Modi Grand Prix Gold finalist will face Korea's Lee Dong Keun next.

In the mixed doubles competition, B Sumeeth Reddy and Ashwini Ponnappa lost 11-21 8-21 to the third-seeded Chinese duo of Lu Kai and Huang Yaqiong.

It was a rare bad day in office for Sindhu as she was completely outwitted by arch-rival Marin, who showed tremendous agility and pounced on every opportunity to emerge victorious.

Sindhu, who had dropped down to world No.5 due to her first round exit at the Malaysia Open last week, never looked the player who had outsmarted Marin not too long back in Delhi. The Indian just couldn't match up to the pace of Marin.

The opening game started aggressively with Marin being quicker off the blocks in fast-paced rallies. Marin opened up a 2-0 lead early on and then made Sindhu run across the court with her angled strokes.

Sindhu, on the other hand, miscued her shots even as Marin sealed an 11-4 advantage with a smash on the Indian's backhand.

The Spaniard continued in the same vein yelling her heart out at every point won and did not allow Sindhu to gather herself. Marin was up 16-4 in no time.

Sindhu picked up a few points to make it 11-18 but a wide hit helped Marin close the game in 14 minutes with a body smash.

The second game was no different and Sindhu continued to find the going tough against a consistently aggressive Marin. Sindhu lagged 5-11 at the break.

It was an on-rushing tap from near the net that helped Marin grab the advantage at the interval. Even after the breather, Marin didn't take her foot off the pedal and moved to a 19-11 lead.

Sindhu tried a late comeback but it was too little too late as Marin grabbed the match point with a body smash. Sindhu then handed over the match to the Spaniard with a service fault, summing up an unusually bad day for her.

Continue FREE with Ads Pay Rs. 1 to Read Without Ads
READ MORE IN:
P.V. Sindhu Sports
Next Story : Smoking to Kill 200 Million in China This Century: WHO
Download the Outlook ​Magazines App. Six magazines, wherever you go! Play Store and App Store