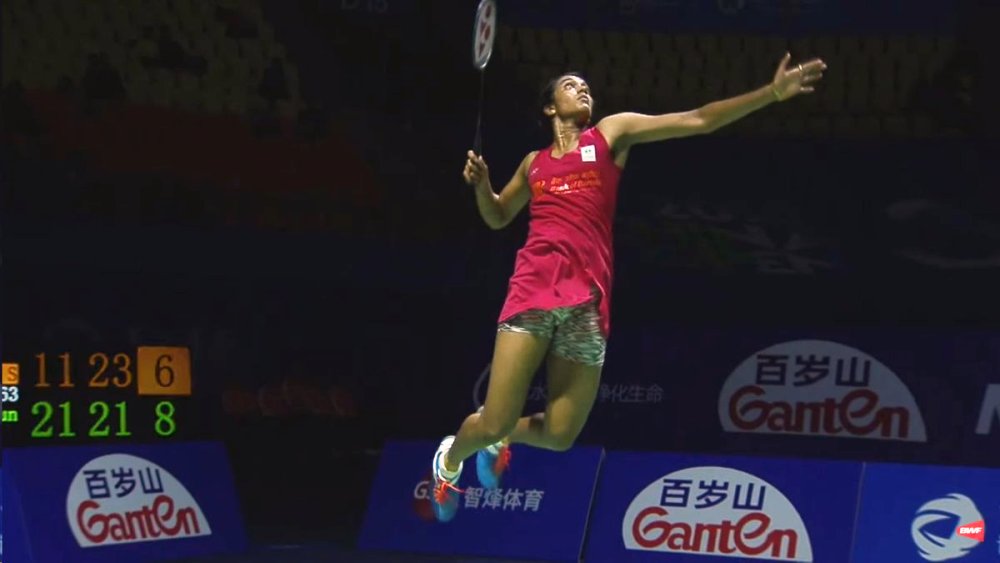 Sindhu, who became the toast of the country after becoming the first Indian women to win a silver at Rio Games, continued her rampaging run as she lifted the prestigious title after beating Sun 21-11 17-21 21-11 in the summit clash that lasted an hour and nine minutes.

World No. 11 Sindhu had come into the match with a 2-3 head-to-head record but then statistics counted little when she took the court at the Haixia Olympic Sports Center.

Sindhu dished out a dominating game as she zoomed to a healthy 11-5 lead early on. The Indian looked sharp and athletic as she engaged in a fast-paced game to bamboozle her opponent.

Eventually it was a cross court return which earned Sindhu a massive 12 game points at 20-8. A couple of smashes on Sindhu's forehand and backhand and a drop going to the net helped Sun save three points. But Sindhu sealed the opening encounter after dominating a parallel game and finishing it with a return that hit Sun's face.

In the second game, Sindhu had a slender 6-3 lead which she extended to 11-7 and 14-10. But Sun soon broke the rhythm by mixing her strokes and coming up with steep and powerful body smashes to catch up with the Indian at 14-14.

A sharp smash and a superb return on Sindhu's backhand helped Sun grab a 18-16 lead which became 19-16 after the Indian lost a video referral. At 20-16, Sun hit the nets but she roared back into contest when Sindhu's stretched low return at the forecourt could not cross the net.

Back to her winning side of the court, Sindhu once again started with new exuberance as the duo locked themselves in a battle of supremacy. As a result service changed hands too quickly as they moved together till 6-6.

But Sindhu moved ahead with a couple of powerpacked returns which Sun failed to negotiate. The Chinese also faltered with a lift and also hit wide as Sindhu reached 10-6. A few errors helped Sun make it 8-10 before Sindhu entered the interval with a 11-8 advantage.

Sindhu continued to extend her lead even as Sun tried to vary the pace of the rallies but her errors continued to pile up as the Indian was soon 19-11 up. Sindhu then grabbed the match point when Sun let go of the shuttle as it kissed the back line and then the Indian pushed the shuttle at the back, leaving the Chinese stranded before letting out a joyous scream.

Saina Nehwal had clinched the China Open in 2014 before finishing runners-up last year.

Sindhu had reached her maiden Super Series final at the Denmark Open last year but the title eluded her then as she lost in straight games to 2012 Olympic champion China's Li Xuerei.