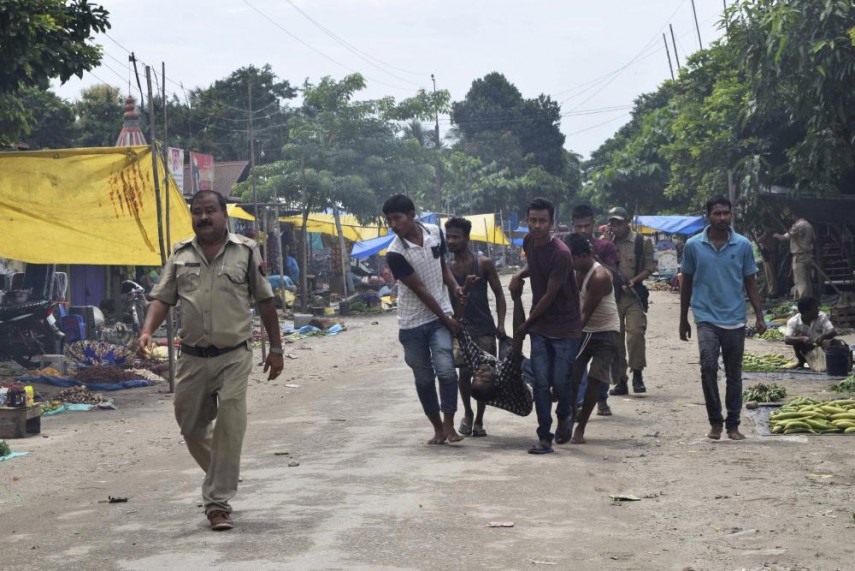 Assam Chief Minister Sarbananda Sonowal today visited the Friday attack site here and said strong action would be taken against the banned NDFB(Sonbijit) outfit and "none would be spared" for the killing of 14 people.

"No matter how strong the militant group is, our government will take strong action against it. All those connected with the killing will be hunted out and brought to book," Sonowal told reporters after visiting the weekly Balajan Tiniali market where the massacre took place.

"Whatever evidence has been collected so far show that NDFB(Songbijit) is behind the killings", he said.

"All the security forces are coordinating the search operations and none will be spared," the chief minister said.

"It is the prime duty of the government to protect the people and their property. All will be given protection, I assure," Sonowal said.

Director General of Police Mukesh Sahay said the slain NDFB-S militant, whose body was recovered, would be identified by DNA test as his parents were unable to recognise his body as they had not seen him for the past 8-9 years.

Meanwhile, Kokrajhar Deputy Commissioner Madhu Prasad Sarma told PTI that the killers were believed to have come from Pakriguri on the Indian side, about 10 km from Bhutan border.

Chairing the Strategy Group meeting of the Unified Command, Sonowal directed the police, army, CRPF and other paramilitary forces to deal with the latest violence in Kokrajhar with firm hand.

"Vigil should be stepped up to foil the sinister designs of anti-national forces," he said, appealing people to remain alert to prevent the nefarious designs of these forces and to maintain peace and harmony at any cost.

Keeping in mind the upcoming Independence Day, Sonowal directed the civil and police administration to be on high alert and to beef up security to thwart any sinister designs of anti-national forces, said a government release.

The district Deputy Commissioners and Superintendents of Police were also directed by the Chief Minister to hold security review meetings and nagarik samiti meetings to prevent any untoward incident.

Emerging from the meeting, Chief Minister told reporters his government would not compromise with terrorism.

"Ours is a zero tolerance approach towards terrorism. We are fully committed towards protecting life and property of the people," he said.

Meanwhile, the situation was under control in Kokrajhar with security forces intensifying operation against the NDFB(S) and three additional companies have been deployed to stop recurrence of violence, the release said.

The state government has requested the Union Home Ministry for deployment of 75 companies of central forces, which had been withdrawn after the Assembly elections.

The Chief Minister met the family members of those killed in the terror attack and expressed his condolences, besides interacting with the local people at Balajan Tinali Weekly Market.

An ex-gratia payment of Rs five lakh each has been paid to the next of kin of the deceased, Rs one lakh each to the grievously injured and Rs 20,000 to those who sustained minor injuries, the release added.