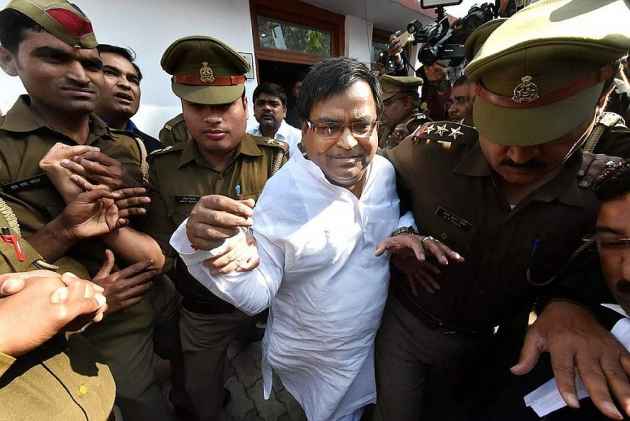 Former Uttar Pradesh minister Gayatri Prajapati, who is lodged in the district jail here on charges of gang-rape, has demanded facilities commensurate with the status of an ex-minister and ex-MLA.

"It was then that Prajapati demanded that he be given facilities which he should get as a former minister and former MLA. He (Prajapati) was told that he should send an application to the district administration and court through the jail authorities," Sharma said.

The DM also said the district administration will take legal advice, and after talking with jail authorities will provide facilities while staying within the framework of law.

"It would be better, if the former minister approaches the court whose decision will be followed by the district administration," Sharma said.

At present, Prajapati is living as an ordinary inmate of the jail.

"He is sleeping on the floor (using a blanket provided to him) and eating jail food. Prajapati is not getting any special facilities in the jail, and is living as an ordinary inmate," the DM said.

No suspicious material was found in the jail or in Prajapti's barrack during the search, he said.

On March 15, Prajapati was arrested from Aashiyana area of the city after absconding for nearly a month.

Prajapati was booked on a Supreme Court directive. On February 17, an FIR was lodged against him and six others for allegedly gang-raping a woman and attempting to rape her minor daughter.

The apex court had asked the UP Police to submit an action taken report regarding the incidents in eight weeks.

On June 27, Samajwadi Party leader Mulayam Singh Yadav had visited the district jail here to meet the rape accused minister and termed him "innocent", drawing sharp criticism from the BJP.

The matter had acquired a political hue as it came at a time when electioneering was at its peak in Uttar Pradesh during the Assembly polls.

On July 3, a special Protection of Children from Sexual Offences Act (POCSO) court deferred to July 10 framing of charges against Prajapati and his associates in connection with a gangrape case.