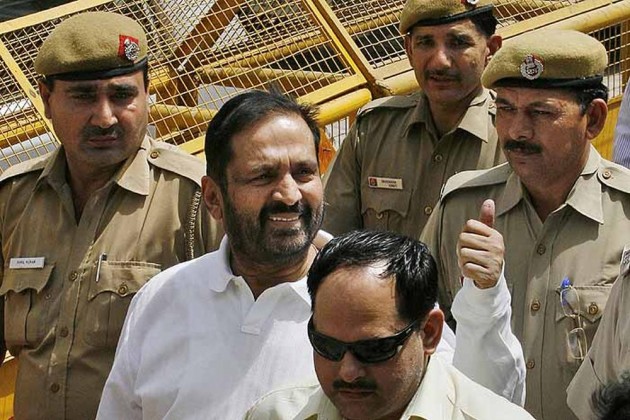 The Sports Ministry today issued a show-cause notice to the Indian Olympic Association, threatening to derecognise the body if it does not reverse its decision to make scam-tainted Suresh Kalmadi and Abhay Singh Chautala as Life Presidents.

Kalmadi and Chautala were elevated to the honourary position at the IOA's Annual General Meeting in Chennai yesterday, shocking the Indian sporting landscape and leaving the Sports Ministry fuming.

As the storm gained in intensity today, Kalmadi was the first to step aside, but Chautala refused to follow suit.

Sports Minister Vijay Goel said that it will severe ties with the IOA if the controversial decision is not overturned.

The government has decided not to deal with the IOA as the National Olympic Committee until Shri Suresh Kalmadi and Shri Abhay Singh Chautala, both of whom have been charge-sheeted, resign or are removed from the posts of Life President in IOA," the sports ministry said in a statement.

"The Government after careful consideration has decided to issue a show cause notice to IOA as to why it should continue to be recognized as the National Olympic Committee (NOC) when it has failed to conform to the basic principles of ethics and good governance," it added.

"This is considered imperative because the present action of IOA, as the NOC, has adversely impacted the standing and prestige of the country and has set a wrong precedent that is not in the interest of Indian sports."

The ministry said that it has consistently been opposing creation of posts in the IOA and other sports bodies which allow back-door entry to individuals who are otherwise ineligible, including those charge sheeted/convicted, to hold positions as office-bearers as per the provisions of Sports Code.

"The Ministry is of the firm view that the action of IOA is against the principles of ethics and good governance as laid down by International Olympic Committee. The action is also in contravention of principles laid down in various judgments by the Supreme Court of India and High Courts wherein they have maintained that NOC/NSFs perform state like functions, including selection of national teams and therefore they come within the writ jurisdiction of High Court and are governed by public law.

"The Ministry is of the view that IOA being the mother sports body is required to maintain the highest standards of probity and good governance and stand as a role model for others to emulate. But they have failed to do so," the statement added.