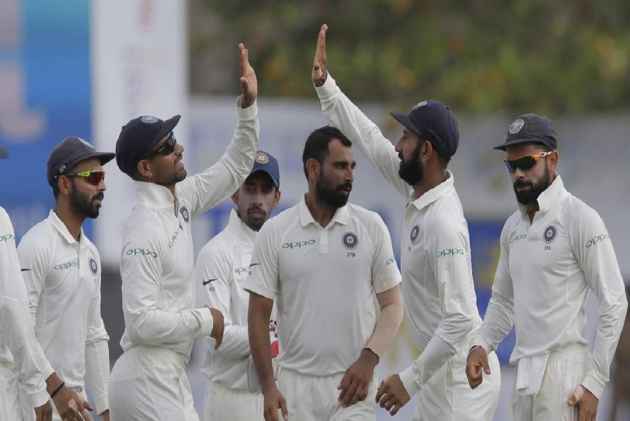 Bowlers put their foot on the pedal after a flamboyant innings from debutant Hardik Pandya enabling India to be in firm control of the proceedings in the first Test against Sri Lanka, here.

At stumps on the second day, Sri Lanka were struggling at 154 for 5 after Pandya's 49-ball-50 helped the visitors reach a mammoth first innings score of 600. Shikhar Dhawan with 190 and Cheteshwar Pujara's 153 were the cornerstone of the gigantic total.

Sri Lanka need another 246 runs to avoid the follow-on with former skipper Angelo Mathews batting on 54.

Mohammed Shami (2/30) had an impressive comeback to Test arena while Umesh Yadav (1/50 in 8 overs) was erratic unable to hit the right length. Ravichandran Ashwin (1/49 in 18 overs) was economical and Abhinav Mukund's alertness in the field contributed to a run-out.

The Lankan slide started with opener Dimuth Karunaratne (2) being trapped leg before by Yadav in the second over of the Lankan innings and the batsman wasted a DRS review in a bid to reverse the decision.

The Indian team upped the ante in the final session where they got four wickets. Post tea break, Shami got reward for hitting the right length.

First Shami accounted for Danushka Gunathilaka (16) in the 15th over and then four balls later, he sent back Kusal Mendis (0), with both batsmen caught at first slip by Shikhar Dhawan.

He reached 50 in 44 balls, which included 10 fours, and put on 61 runs for the second wicket with Gunathilaka before the latter was out caught.

Afterwards, he put on another 57 runs for the fourth wicket with Mathews (54 batting, 91 balls, 8x4) as the duo battled hard against Ashwin.

Scoring at a steady clip, the hosts reached 100 in the 25th over. Shortly afterwards, Tharanga was run-out as his bat was found hanging in the air and Mukund stationed at silly point showed smartness to hit the stumps, effecting a run-out.

Mukund's sharp reflexes helped India get another wicket as he held on to a fine one-handed catch at silly point again to give Ashwin his first wicket of the match. Niroshan Dickwella (8) being the batsman.

Earlier Pandya's rollicking innings consisted of five fours and three huge sixes which was the difference between a score of 550 and 600.

He added only 14 runs with Ravindra Jadeja (15) after lunch before the latter was clean bowled by Nuwan Pradeep (6- 132).

Pandya was dropped at first slip off Rangana Herath (1- 159) when he was batting on 4. But thereafter, he didn' give any chances to the opposition, unleashing his full array of strokes as he sped to his half-century.

Shami (30) gave him optimal company and the duo put on 62 runs for the 8th wicket as they attacked the Lankan bowling. The latter fell to Lahiru Kumara (3-131) but not before making sure India built on their commanding position.

Pandya was the last man out, after he reached his maiden Test half-century off 48 balls, whilst bringing up India’s 600 in the 134th over as well.

In the morning, Pradeep took his maiden five-wicket haul in Test cricket as India reached 503 for 7 at lunch after losing 4 wickets for 104 runs.

Starting from overnight 399/3, India crossed the 400-mark on the first ball of day two.

Pujara had a DRS decision for caught behind turned down off Herath in the very third over of the day.

He crossed 150 off 257 balls, inclusive of 13 fours, and matched his previous Test best of 153 runs against South Africa at Johannesburg in 2013.

Pujara also went past his best Test score of 145* in Sri Lanka, scored at the SSC back in 2015. Meanwhile, Rahane scored his 12th Test half-century off 118 balls.

The Saurashtra right-hander was finally out caught behind off Pradeep in the 98th over. It started the slide for India as Rahane was caught at slip four overs later off Kumara.

Surprisingly, Ashwin (47 runs, 60 balls, 7 fours) and Wriddhiman Saha (16) both came out to bat ahead of debutant Hardik Pandya.

The seasoned duo managed to put the brakes on Sri Lanka's attempt at getting into the tail quickly. Even so, the hosts put on a much-improved bowling performance from day one. But for India's overnight advantage, it would have put this match in an interesting balance.

Overall, they put on 59 runs for the sixth wicket before Saha holed out to mid-on off stand-in skipper Herath to give him his first wicket in the Test.