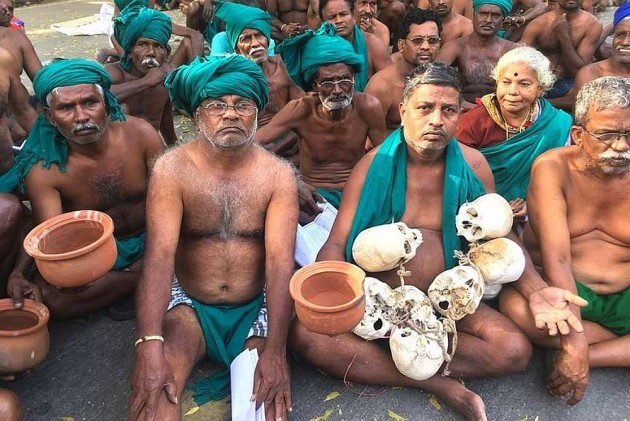 Tamil Nadu Chief Minister Edappadi Palaniswami today met farmers from the state who have been protesting at Jantar Mantar for the last 39 days. The chief minister assured the farmers that their demands will be met and advised them to call off their protest. He told them he will meet Prime Minister Narendra Modi today and submit a memorandum highlighting their plight. Mr Palaniswami has already discussed the issue with Finance Minister Arun Jaitley and Home Minister Rajnath Singh.
Mr Palaniswami, who arrived in the national capital yesterday, will attend the NITI Aayog meeting along with chief ministers of other states.

The protesting farmers have been demanding a Rs. 40,000-crore drought relief package, farm loan waiver and setting up of the Cauvery Management Board by the centre. Over the last 39 days, they have shaved their heads, halved their moustaches, held mice and snakes in their mouths, conducted mock funerals, flogged themselves and even carried skulls of other farmers who had committed suicide due to debt pressure.

Earlier this month, dozens of protestors blocked all six lanes of Chennai's arterial Kathipaara flyover by tying an iron chain to the poles on either side to express solidarity with the farmers protesting in Delhi.

The Madras High Court, too, had directed state government to expand its farm loan waiver scheme to include farmers who own land over five acres. However, there is no relief for those who have borrowed from nationalised banks. The state had sought Rs. 40,000 crore from the centre, which sanctioned only Rs. 4,000 crore.

With 60 per cent deficit in rainfall, Tamil Nadu witnessed its worst drought in 140 years.