Thousands Bid Farewell to Lee Amid Heavy Rains in Singapore 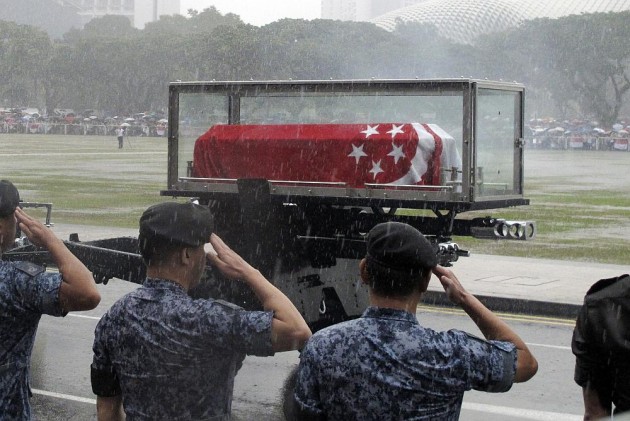 Print
A
A
A
increase text size
Outlook March 29, 2015 13:34 IST Thousands Bid Farewell to Lee Amid Heavy Rains in Singapore

Tens of thousands of teary-eyed Singaporeans today braved torrential rains to bid adieu to the country's founding leader Lee Kuan Yew in a grand funeral attended by a host of world leaders, including Prime Minister Narendra Modi who described him as one of the "tallest leaders of our times".

91-year-old Lee, the city-state's prime minister for 31 years and widely respected as the architect of Singapore's prosperity, died of severe pneumonia on March 23.

Global dignitaries, including monarchs, presidents, prime ministers and former leaders, joined hundreds of thousands of Singaporeans at a state funeral service which was telecast live and streamed on various social media.

Prime Minister Modi arrived in Singapore this morning and attended the service.

After eulogies ended at the three-hour state funeral, defence sirens were blown throughout Singapore's housing estates for a minute of silence to pay respects as the last post was played by a military bugler.

The ceremony ended with the singing of the Malay- language national anthem "Majulah Singapura", after which Lee's remains were driven to a private cremation service.

In a note to his children in 2011, one year after the death of his wife of 63 years Kwa Geok Choo, Lee had said that "for reasons of sentiment, I would like part of my ashes to be mixed up with Mama's, and both her ashes and mine put side by side in the columbarium".

Earlier, Singaporeans lined up amid heavy downpour along a 15.4 km route on which Lee's coffin, draped in red-and-white Singapore flag and protected from the downpour by a glass casing, made a journey from Parliament House to the University Cultural Center at the National University of Singapore, where the service was held.

Lee's body had been lying in state at the Parliament for the public to pay respects to the leader. More than 450,000 people had paid their last respects to Lee during the week.

The Singapore Armed Forces, which was established by Lee, gave the highest honour to the leader with a 21-gun salute, a fly-past by four F-16 jets and sail-past by naval boats. A 21-gun salute is normally reserved for sitting heads of state but an exception was made for Lee.

"The light that has guided us all these years has been extinguished," he said.

Soon after his arrival here, Prime Minister Modi lauded Lee as a "global thinker" and said India deeply valued his friendship and his support for its economic progress.

Modi, who had earlier visited Singapore as Gujarat Chief Minister in October 2006, said the former Singapore Prime Minister was "among the tallest leaders of our times".