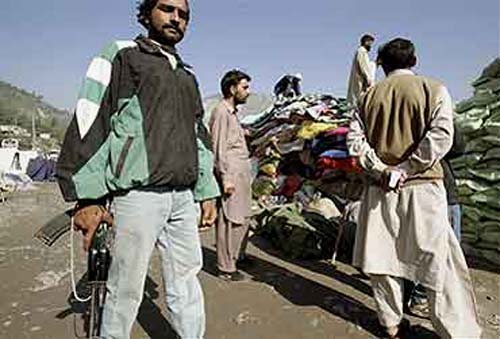 A Hizbul camp in PoK

outlookindia.com
-0001-11-30T00:00:00+0553
In a major success, a top militant and one of the founders of Hizbul Mujahideen Mohammad Ahsan Dar was on Wednesday arrested by police in Bandipora district of Jammu and Kashmir.

Acting on specific information that Dar had returned from Pakistan-occupied Kashmir (POK) and was co-ordinating the activities of different militant outfits, Jammu and Kashmir Police arrested him in the wee hours while he was trying to sneak into Sumbal area from his home town Pattan, he said

The DIG said Dar had parted ways with Hizbul Mujahideen following differences with the top brass of the outfit and founded Muslim Mujahideen in 1992. He, however remained close to Sallahuddin, who also heads the United Jehad Council-- an amalgam of militant outfits active in the state

Dar, who is in his 50s, was arrested in 1993 and released in 1999 after six years in detention, Mir said, adding he had also visited Pakistan and has remained in close contact with ISI and other Pakistani agencies. He has been regularly receiving funds from them.

According to preliminary investigations, Dar had infiltrated into the valley and was active since last one year. Dar had organised various attacks on security forces and was trying to give a fresh impetus to militant activities within the state and in the rest of the country, Dar said.

Terming Dar as a "prized catch", Mir said an identity card in the name of Mohammad Altaf, a teacher, was recovered from him.

"It is a big success for Jammu and Kashmir Police that we have nabbed him," he added.

Dar had first crossed over to POK in 1984 in a bid to get arms training. However, he failed in his mission and again went their in 1988, the officer said.

After receiving arms training, he returned to the valley the same year. He was arrested in 1988 but escaped from a hospital. He went again across the Line of Control in 1989 and returned to lay the foundation of Hizbul Mujahideen and became its chief commander, Mir said.

He had infiltrated into India via Bangladesh border. Some incriminating documents have been recovered from him and further investigations are on, the DIG said.

The DIG said investigations revealed that he had come to the valley on more than one occasion during the past four years.

Dar had met a number of militant leaders including Atif and Abu Hurrarah of LET in Shopian district of South Kashmir.

Meanwhile, Hizbul Mujahideen today said Dar was expelled from the outfit in 1991 and since then had no connection with the organisation.

A spokesman of the outfit, in a statement, also refuted the police claim that Dar was sent here to coordinate activities of militant outfits.