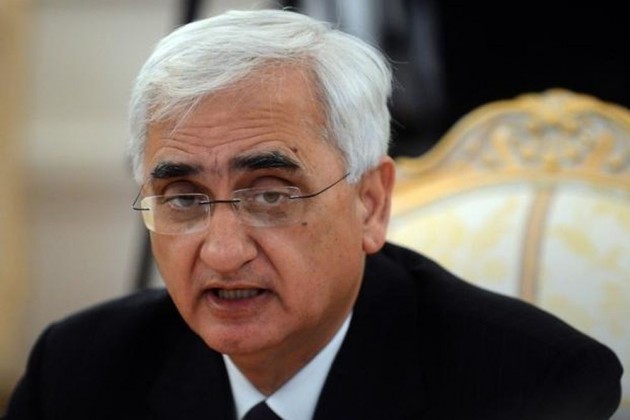 Print
A
A
A
increase text size
Outlook May 03, 2017 12:52 IST Triple Talaq: SC Allows Khurshid To Assist As Amicus Curiae

The Supreme Court today allowed former union minister Salman Khurshid to assist it in hearing a batch of pleas challenging the constitutional validity of 'triple talaq', 'nikah halala' and polygamy practices among the Muslims.

"We will take it on record. It's not an issue," the bench said when the Congress leader said that the time for filing written submission in the matter has already expired and he intended to file certain pleadings in the case.

A five-judge constitution bench would commence hearing from May 11 to decide on the batch of petitions challenging the practices of 'triple talaq', 'nikah halala' and polygamy among Muslims.

The Centre had on April 11 filed fresh submission in the apex court, saying these practices impacted the social status and dignity of the Muslim women and denied them the fundamental rights guaranteed by the Constitution.

The government had reiterated its earlier stand and said these practices rendered the Muslim women "unequal and vulnerable", not only compared to the men of their community, but the women of other communities as well.

The apex court had on March 30 observed that 'triple talaq', 'nikah halala' and polygamy were important issues involving "sentiments".

The Centre had said these practices emerged from "patriarchal values and traditional notions about the role of women in society", asserting that "the right of a woman to human dignity, social esteem and self-worth are vital facets of her Right to Life under Article 21".

'Nikah halala' is a practice intended to curb incidence of divorce under which a man cannot remarry his former wife without her having to go through the process of marrying someone else, consummating it, getting divorced again, observing the separation period called 'Iddat' and then coming back to him.

Seeking to declare these practices as unconstitutional, the government had said reforms in Muslim personal law have not taken place for over six decades and Muslim women, who comprise eight per cent of the population, have remained "extremely vulnerable" due to the fear of instant divorce.

Influential Muslim organisations like the All India Muslim Personal Law Board (AIMPLB) have opposed the court's adjudication of these matters, maintaining that these practices stemmed from the Holy Quran and were not justiciable.

Several Muslim women have challenged the practice of 'triple talaq' in which the husband, quite often, pronounces talaq thrice in one go, sometimes over phone or even a text message.

The apex court had earlier said it would decide the issues pertaining to the legal aspects of 'triple talaq', 'nikah halala' and polygamy among Muslims but would not deal with the question whether divorce under Muslim law needs to be supervised by courts as it fell under the legislative domain.

The Centre had on October 7 last year opposed in the apex court these practices and favoured a relook on grounds like gender equality and secularism.

The AIMPLB had told the court that pleas challenging such practices among Muslims were not maintainable as the issues fell outside the realm of judiciary.

The apex court had on its own taken cognizance of the question whether Muslim women faced gender discrimination in the event of divorce or due to other marriages of their husband.