Virtual Washout of Proceedings in LS, RS Due to AIADMK Uproar 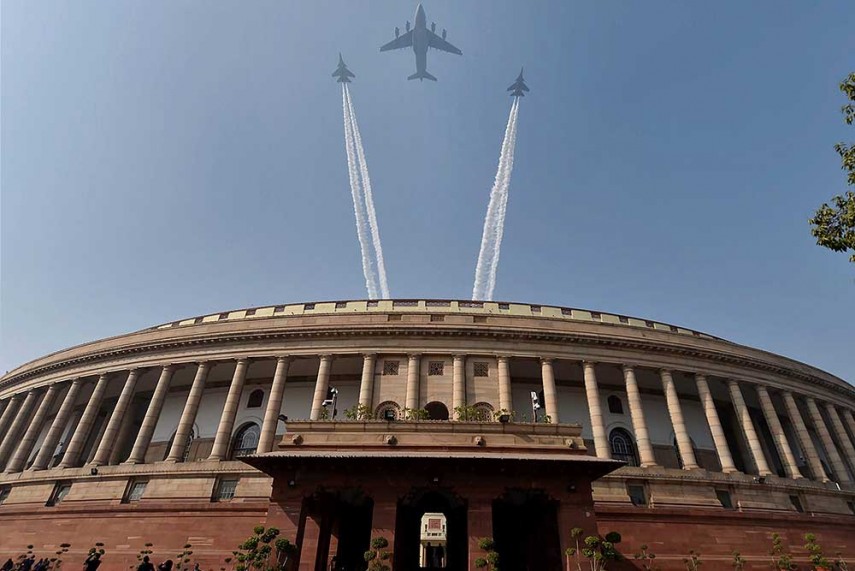 Print
A
A
A
increase text size
Outlook March 01, 2016 12:44 IST Virtual Washout of Proceedings in LS, RS Due to AIADMK Uproar

Proceeedings of both Lok Sabha and Rajya Sabha were virtually washed out today due to the uproar created by AIADMK members who were demanding action against former Union Minister P Chidambaram's son Karti over the Aircel-Maxis issue.

Both the Houses witnessed continuous disruptions due to the slogan-shouting by AIADMK members who were in the Well, forcing repeated adjournments. Lok Sabha was adjourned for the day at around 2.45 pm while the day's proceedings of Rajya Sabha were terminated at around 4 pm.

The AIADMK members were displaying copies of an English daily which has claimed that Karti has invested in real estate across the world, as per investigations by the Enforcement Directorate and Income Tax authorities during searches at his premises.

In the Upper House, an angry Deputy Chairman P J Kurien even threatened to suspend the agitating members but to avail.

In Rajya Sabha, a Calling Attention Motion on inflammatory speeches made by a Union Minister and elected representatives violating the Constitution and oath of office could not be taken up due to the noisy protests by AIADMK.

Trouble started in the House as soon as it met for the day, with AIADMK members, waiving copies of a newspaper, raising the issue and demanding action against Karti Chidambaram.

Chairman Hamid Ansari said it was "unbecomming" of members and accused them of promoting the particular newspaper which was "not proper.

As AIADMK members led by V Maitreyan continued raising slogans for arrest of P Chidambaram and his son Karti over the Aircel-Maxis issue, a visibly angered Kurien said, "How can I take action? I can take action against you."

He warned that he could taken action against the AIADMK members under Rule 255 and bar the disrupting members from the proceedings of the House for the day.

With regard to the Calling Attention Motion, Kurien said it was not taken up since governemnt did not distribute the statement. He said Minister of State for Parliamentary Affairs Mukhtar Abbas Naqvi was on a wrong foot.

Naqvi said no such matter can be raised in the same session.

During the brief periods for which the House met amid adjournments, Congress accused AIADMK members of disrupting the proceedings at the behest of the ruling BJP.

As soon as the Lok Sabha met for the day, AIADMK members rushed to the Well demanding action on Aircel-Maxis deal. They raised slogans like "We want action", "Aircel-Maxis why delay, why delay" and "NDA sarkar take action."

Amid uproar, Speaker Sumitra Mahajan continued with the Question Hour for some time but adjourned the House for nearly ten minutes. Soon after the House was adjourned, AIADMK members were seen distributing copies of the newspaper to BJP members.

At one point of time, Congress leader in the Lok Sabha Mallikarjun Kharge stood up to raise some issue, apparently relating to Privilege notice against HRD Minister Smriti Irani over the Rohith Vemula suicide issue, but he was shouted down by the AIADMK members.

Gandhi was seen telling AIADMK members against raising slogans near Kharge. Some Left members were also seen standing at their places and seeking Speaker's intervention.

Parliamentary Affairs Minister M Venkaiah Naidu said if they give proper notice, the issue could be discussed and government was open to a debate.

Raising the Aircel-Maxis issue, AIADMK leader P Venugopal demanded that Prime Minister should come to the House to respond on the issue which involved former Finance Minister and former DMK Minister.

Even assurances by Minister of State for Parliamentary Affairs Rajiv Pratap Rudy that the matter was in Supreme Court and government would do "whatever is within the law" failed to satisfy the agitated members who continued to shout slogans like "We want action", "Aircel-Maxis why delay, why delay" and "NDA sarkar take action".

In Rajya Sabha, the Chairman told the protesting AIADMK members: "The Chair gets the impression that some members are in the business of promoting a specific newspaper. This is very improper. You will not bring newspapers"

He asked them not to come into the well, saying, "don't come here. All I can say is this is unbecomming of you."

The Question Hour also saw disruption and then the House was repeatedly adjourned over the issue.

With regard to the Calling Attention Motion, Azad said, "There has to be an order in the House to discuss this".

Azad, who was to move the motion, also said that the disruption was "organised by the ruling party" so that the calling attention on the "serious" issue, listed in the agenda today, is not taken up.

"A serious issue is not discussed like this. This is a deliberate attempt by the AIADMK. Otherwise, never before has AIADMK behaved like this," the Congress leader said.

Kurien, who was in the Chair, kept slamming the noisy protests, saying the behaviour of the AIADMK MPs was "very bad".

"You can approach the government for appropriate action. Why are you disrupting the proceedings of the House? This is irresponsible behaviour. This is murder of democracy,"he said.

Kurien kept telling them to approach the government if they wanted action against a private person.

"Why do you trouble me? I am not the government," he said trying to restore order in the House, but to no avail.

Earlier papers were laid amid sloganeering.

When AIADMK members continued demanding action against Chidambarm, Kurien said, "What can I do, you ask the government" and adjourned the House till 3.45 pm.

When the House re-assembled at 3.45 pm, Kurien asked minister and BJP leader J P Nadda (BJP) to move the Motion of Thanks for the President's address.

To this, Naqvi questioned how it can be initiated when the House is not in order and appealed AIADMK members for cooperation.

Kurien too sought AIADMK members' cooperation but as they continued their protest, he adjourned the House for the day.