Was Upset Over 'Stupid' Criticism in Devyani Case: Bharara 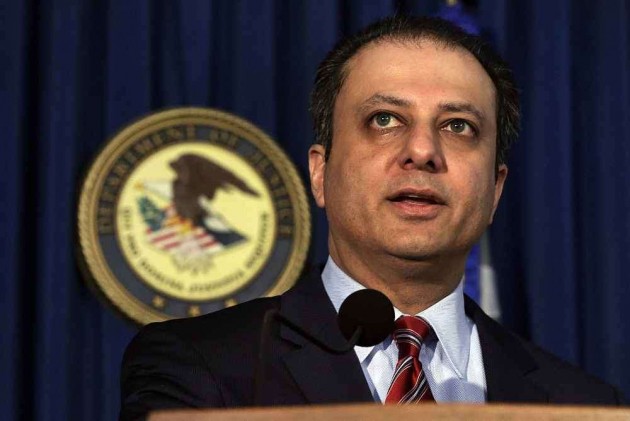 Print
A
A
A
increase text size
Outlook June 01, 2014 12:49 IST Was Upset Over 'Stupid' Criticism in Devyani Case: Bharara

The Devyani Khobragade case came up for a discussion at Harvard Law School with India-born US prosecutor Preet Bharara telling the graduating class that the "intense" criticism and accusation hurled at him for charging the Indian diplomat with visa fraud had upset him.

Bharara was invited to address students and faculty at the prestigious law school on its 2014 Class Day ceremony last week.

The top US attorney in Manhattan spoke about the criticism he faces from all quarters as well as from various governments because of his work.

He added that he has even "been banned from Russia". Raising the Khobragade case, Bharara said he got the most flak for prosecuting the former Indian deputy Counsul General even though the case was initiated and investigated by the US State Department and seasoned law enforcements officials.

"You may have heard about the case we brought last year in which the State Department arrested a mid-level Indian female diplomat Devyani Khobragade for visa fraud in connection with lies about what she would ultimately pay her domestic worker (also an Indian).

Bharara said he became "personally aware" that Khobragade would be arrested only a couple of days before the arrest was scheduled.

He became bothered by the "line of attack" made by the Indian government and media that he brought the case to "serve his white masters, presumably (US Attorney General) Eric Holder and (President) Barack Obama", both of whom are black.

"That is an example of criticism that is stupid," he said, adding that as the criticism got "increasingly intense" over time, it bothered his parents and this made him upset.

"That was tough because it bothered them," he said. He was also concerned when he had to explain the accusations made against him to his young daughter, he said.

"That was not so pleasant. I'll admit that I was upset as I think a normal human being might be. But as the accusations got more and more absurd, they became downright comical and I got some of my perspective back," he said.

"Indian critics were angry because even though I hailed from India, I appeared to be going out of my way to act American and serve the interests of America, which was odd because I am American and the words US are in my title," he said.

He said, "putting aside disputes about the merits of the case," the Indian government and media decided that the case was brought by an Indian-American "for all manner of bad personal reasons, never mind that the case was initiated and investigated by career law enforcement officials."