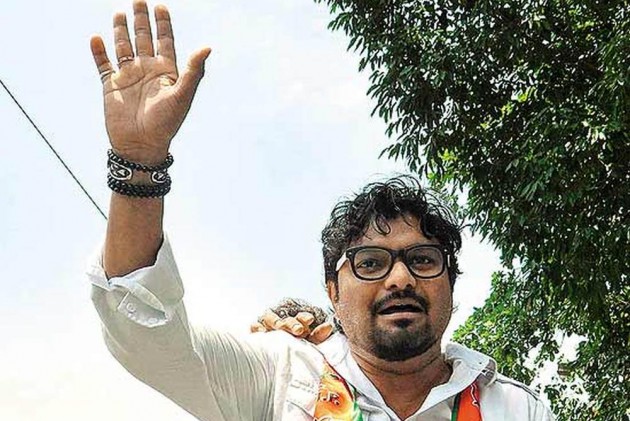 Union Minister Babul Supriyo was attacked with bricks, allegedly by Trinamool Congress activists here, when he was on his way to a police station to stage a protest against the arrest of some BJP workers.

Supriyo later said that he had informed Home Minister Rajnath Singh about the incident and that the latter would seek a report regarding the same from the state.

"I was going to the police station to secure release of some of my partymen. I was hit with bricks and windowpanes of my car were damaged by TMC workers," the Minister of State for Heavy Industries and Public Enterprises, alleged.

"They also showed me black flags. I do not know why the police allowed the mob to come near my car," he said.

"There was protest regarding illegal slaughter houses operating in Asansol under the patronage of TMC minister Malay Ghatak. These slaughter houses are causing havoc to the environment. I have informed the Home minister about the incident and he will seek a report from the state," Supriyo told PTI.

Video footage of the incident showed Supriyo standing on the foot board of a vehicle and a stone landing on his chest.

The BJP state unit has decided to observe a 12-hour bandh all over Asansol and demonstration by burning the effigy of Chief Minister Mamata Banerjee at every district headquarters and a mass agitation. A protest rally has also been planned at at Hazra More.

BJP supporters had planned to 'gherao' the house of TMC leader and minister Malay Ghatak in Asansol Uttar Police Station area when the trouble began.

According to sources, BJP workers were prevented from moving towards the residence of Ghatak, which prompted them to proceed towards the Asansol Dakshin police station. A clash ensued between the supporters of the BJP and the TMC when the saffron party workers were proceeding for the protest.

In all, 57 persons have been arrested in connection with the incident, Meena said.

Affirming that that they have the right to stage protests, Supriyo claimed BJP workers were beaten up by the TMC men.

Ghatak had refuted allegations of illegal slaughter houses being run under his patronage and had accused the BJP of whipping up communal passions.

"This is nothing but a slander campaign against me. The BJP is trying to whip up communal tension in the area," he said.

Local TMC leader Shivdasan said the BJP workers should have lodged protest with the administration instead of deciding to hold an agitation in front of the minister's house.

Here is a video of the incident:

Continue FREE with Ads Pay Rs. 1 to Read Without Ads
READ MORE IN:
Babul Supriyo National
Next Story : Sensex Gets a Lift From Earnings Uptick, Paces up 145 Points
Download the Outlook ​Magazines App. Six magazines, wherever you go! Play Store and App Store