While Some Hail VVPAT, AAP And Sena Express Their Doubts 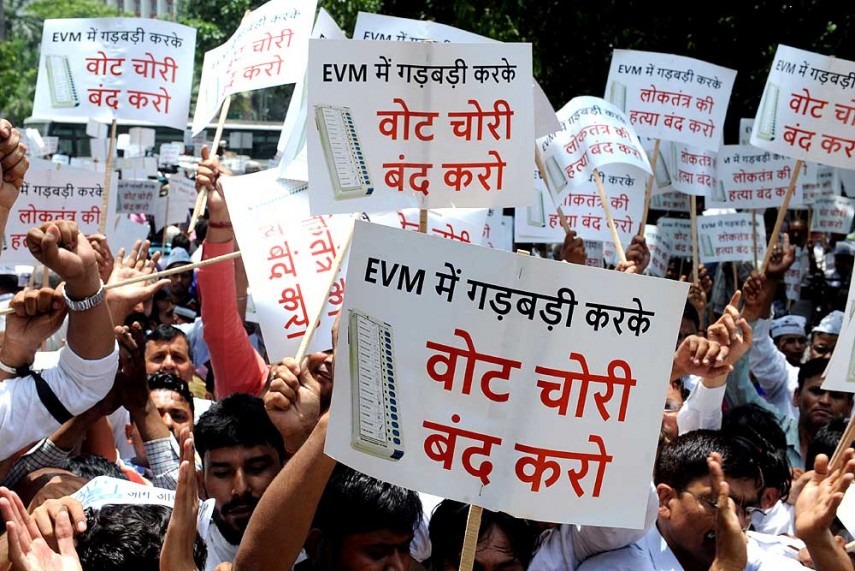 Print
A
A
A
increase text size
Outlook May 13, 2017 19:06 IST While Some Hail VVPAT, AAP And Sena Express Their Doubts

The Election Commission's (EC) move towards promoting the use of voter verifiable paper audit trail (VVPAT) on Friday was received with mixed reactions, some hailed the decision, while others continued to raise doubts about its authenticity.

Aam Aadmi Party: "We have time and again displayed how EVMs can be hacked; VVPAT is also a machine which again can be hacked. Why is the Election Commission away from our proposal of a 'Hackathon'"- Manish Sisodia

Rashtriya Janata Dal: "According to the Article 324 of the Constitution, the Election Commission has to be the custodian of the electoral process, not of the machine. Machine is an instrument, whereas the end should be free and fair elections. It is the shared feeling among all stakeholders- winners, losers and the voters that the country should experience free elections"- Majoj Kumar Jha

Bharatiya Janata Party: "It is the prerogative of the Election Commission whether to use VVPAT as a model or not. Election Commission is a free body and they take decisions which are in the interest of the democracy. If they feel VVPAT is best suited for our country, welcome it"- Shahina NC

Congress: "We welcome the decision. Now there will be greater transparency in future elections. Whatever confusion that was there among voters will be removed by VVPAT now"- Ajay Alok

Communist Party of India: "Under VVPAT, voters will be given the right to check the name within seven seconds; the question is it even practically possible given the short duration of time given. If the Election Commission feels that through this the situation can improve, then we are fine with it. But, we should move towards better electoral reforms like a proportional representative system and state funding of elections"- Atul Anjan.

Janata Dal Secular: "This is positive step by Election Commission. Use of VVPAT in future elections is a good decision. Any suspicion in the minds of the people on EVM is a danger for democracy,"- Danish Ali.

Dravida Munnetra Kazagam(DMK): "We have always stood for technological advancement. Though the Election Commission has cleared that there was no tampering in the EVMs, we welcome the move towards VVPAT technology"- T Shiva.

Bahujan Samaj Party: "Seven seconds given by VVPAT are not enough. Two slips should come out of the machine; one of them should be for voter"- Satish Chandra Mishra.

Nationalist Congress Party: "If all other parties are okay with the Election Commission, then, we also appreciate the move. Whatever doubts that were surrounding EVMs should be now cleared by VVPAT"- Tariq Anwar.

While there parties like Shiv Sena and TMK who remained steady on their demand for going back to ballot paper voting.

Shiv Sena: "Counting may take time in the ballot paper voting, but it would be fine to await results of our democracy, even if it takes 1-2days. When EVMs were introduced Balasaheb Thackeray had urged to abandon it, and turn to ballot paper voting."- Anil Desai.

A meeting was convened by the poll panel on Friday to address the alleged Electronic Voting Machines (EVMs) tampering issue.

The poll panel assured the opposition stating that all future elections would be held using VVPATs, which provides evidence of the vote recorded by printing a paper receipt that is visible before it drops into a sealed box.

The commission highlighted the wide range of technical, administrative protocol and procedural safeguards that fortify the EVMs and VVPATs against any sort of manipulation or tampering. He said the Commission is open to hear suggestions on how to further improve integrity and credibility of EVMs.

Chief Election Commissioner Nasim Zaidi informed the political representatives that the commission will hold a challenge and offer opportunity to political parties to demonstrate that EVMs used in the recently concluded Assembly elections were tampered or that EVMs can be tampered even under the laid down Technical and administrative safeguards. (ANI)