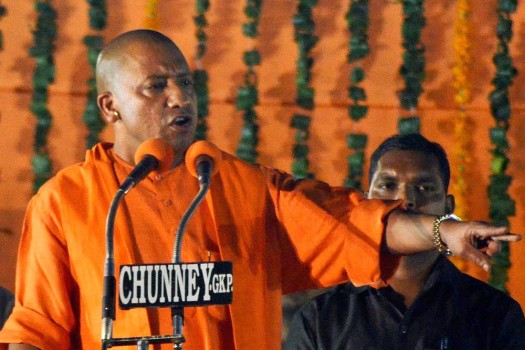 Prajapati's wife, who was accompanied by two daughters, said a minister present at the venue assured them that their grievance would be heard.

"We wanted to meet the chief minister, but he did not meet us," Prajapati's wife told reporters outside the 5- Kalidas Marg residence here of the CM where he was meeting people during the 'Janata Darshan' programme to listen to public grievances.

"I am confident that my husband will get justice. We will make another attempt to have a word with the chief minister," she said.

Prajapati's sobbing daughter claimed her father was being implicated in the case.

"He is innocent. We want justice. We hope the chief minister will listen to us and ensure justice to our family," she said.

The controvesial SP leader was granted bail by a special court last week in a rape and molestation case. But the Allahabad High Court stayed the bail granted to Prajapati by Protection of Children from Sexual Offences (POCSO) court judge O P Mishra.

The high court administration suspended the judge for granting the bail and ordered a departmental inquiry.

Considered close to SP patriarch Mulayam Singh Yadav, Prajapati failed to walk out of jail as he was sent to judicial remand in two other cases.

Prajapati was a minister in the previous Akhilesh Yadav government. The former Samajwadi Party MLA from Amethi had lost the recent election.

The alleged rape of the woman and molestation of her minor daughter had attracted a lot of media attention in the run up to the assembly election.

The victim from Chitrakoot district had approached Gautampalli police station here on February 17 alleging that she was raped by Prajapati and his two accomplices for several months.

Prajapati had gone missing after the election and an FIR was lodged against him on February 27 on the Supreme Court's directive. He was arrested from Ashiyana area of Lucknow on March 15.

He had approached the Supreme Court to get a stay on his arrest. But the apex court asked him to approach the court concerned.

At the time of his arrest, Prajapati had claimed that he was innocent and alleged the charges were a conspiracy to malign him.

The allegations against Prajapati were raked by the BJP during the state assembly elections to attack the then Akhilesh Yadav-led government.

The Supreme Court order to file a police complaint against Prajapati had come just two days before the third phase of polling in the seven-phase state elections which saw Samajwadi Party winning only 47 of the 403 assembly seats while the BJP and its allies bagged 325 seats.

The BJP had accused Akhilesh Yadav of shielding his tainted minister, a charge refuted by the Samajwadi Party.