Khalifa Hifter, former military commander promised "to begin the path of reconciliation, peace and construction" should he emerge victorious in Libya elections.

An Ominous Meeting In Tripoli

In April 2006, I was in Al-Aziziyah, the infamous Gaddafi compound in Tripoli, capital of Libya. There I met the dictator's son and daughter…

A View From The Villa

The Killing of Muammar Gaddafi and his son Muatasim was shown again and again on TV – literally ad nauseam. But in Israel there was another motive for showing these lynch scenes repeatedly...

An Old Evil Dies, A New Evil Is Born

No right-thinking person would shed tears over the death of Gaddafi, the Libyan dictator, but any well-informed analyst with his feet firmly on the ground would be nervous over the likely sequel to his elimination. 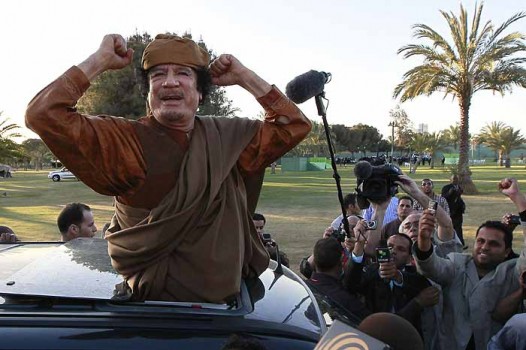 The Sep 2009 WikiLeaks cable by the then American ambassador to Libya, that cost the diplomat his job, but provided fascinating insights into the former dictator's personality

To The Shores Of Tripoli

Time for a democratically elected world executive that would have military forces at its disposal and that could intervene, if a world parliament so decides.

'A Viable Palestine, A Secure Israel'

' We believe the borders of Israel and Palestine should be based on the 1967 lines with mutually agreed swaps, so that secure and recognized borders are established for both states'

He May Be Mad, But He Ain't Crazy

Napolean said that it is better to fight against a coalition than to fight as part of one. It has become very apparent in the coalition war against Muammar Gaddafi

Non-Intervention Is A Dirty Word

For someone who was alive at the time of the Holocaust, especially for a Jew, there can be no doubt at all.

Defiant Till He Dies

In assessing Col Muammar Gadaffi’s continuing defiance of the international pressure to force him to quit, some facts need to be kept in mind. 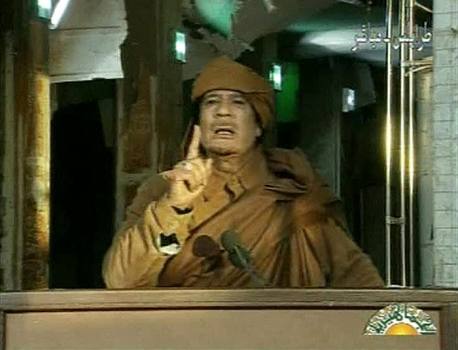 'Will Not Leave Libya, Will Die Here As A Martyr'

Even by Col Gaddafi's standards, it was an extraordinary speech, full of melodramatic defiance against almost everyone, divorced from reality, delusional, long-winded and rambling

Muammar Qaddafi recently suggested that Jews and Arabs should live together in one joint state to be called Isratine. Israelis will be tempted to answer: Thanks, but no thanks. Palestinians might react quite similarly.

There are two morals for the proliferators of nuclear and missile technology - if that is the right word for this strange story. The first is don't get caught. The second is: be an indispensable ally to the United States in the global war on terror.

You really can't rely on these Arabs. Catch 23: If the Arabs are strong, you can't make peace with them. Catch 24: If the Arabs say they want war, you have to believe them. Take this fellow, Qaddafi. For decades he played the clown...

Encouraging Iran to invade Iraq, providing them with the necessary logistic and military support, from a safe distance, has many advantages over other proposals now being considered.